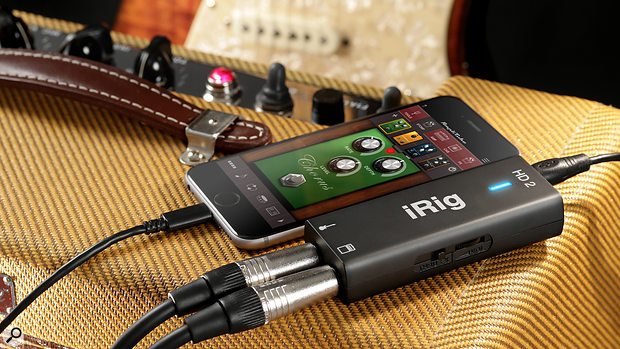 IK Multimedia’s update to their best-selling iRig HD digital guitar interface adds an Amp Out jack that lets players use their iPhone, iPad, Mac or PC live on stage with a traditional guitar amplifier without the need for special adapters. The new version, iRig HD 2 only requires a standard 1/4" instrument cable to make the connection. This output is controlled by a new FX/Thru switch that lets users choose what type of signal is sent — FX sends the processed signal coming from the device, while Thru sends an unprocessed direct signal for using a tuner or in-line recording of the dry signal.

Analogue to digital conversion is performed at 96kHz sample rates at 24-bit resolution, and input gain can be monitored with a multicolour LED and adjusted with a control on the side of the device.

Usefully for performers, the iRig HD 2 also comes with a microphone stand mounting clip and Velcro strip. iRig HD 2 owners also receive free downloads of the full versions of AmpliTube 4 for Mac/PC (a $/€149.99 value) and AmpliTube for iPhone and iPad (a $/€19.99 value for each). With AmpliTube, guitar and bass players will have access to virtual stompboxes, amps, cabinets, microphones, speakers, rack effects and more, all on their computer or mobile device.

iRig HD 2 is available now for pre-order from IK Retailers worldwide or from the online IK store for only $/€99.99*. iRig HD 2 will be available and shipping late September, 2016.

For long playing sessions, iRig HD 2 is compatible with iRig PowerBridge ($/€ 69.99) which keeps the iOS device charged while playing, as well as other IK accessories to complete a live guitar set up like the iRig BlueBoard wireless pedal board ($/€99.99), and the iKlip range of mic stand holders for iPhone and iPad (starting at $/€ 39.99).

Field Music: Building A Track In The Studio
1 month 4 days ago.