IK Multimedia have announced the release of AmpliTube TONEX, a complete software ecosystem based on their powerful new AI Machine Modeling technology that allows users to model their own rigs, as well as playing and recording with thousands of ultra-realistic Tone Models of amps and pedals. This new ecosystem consists of three software products, and a hardware device that combines modelling, amp recording, and re-amping into one single unit.

The software element of the TONEX system is offered both as a PC and Mac application, as well as an App for iPhone and iPad users. IK Multimedia’s new Machine Modeling technology allows users to easily model the sound of any amp, cabinet or pedal, and turn it into a plug-in with a sonic accuracy that the company say is virtually indistinguishable from the real thing. In addition to being able to share their results with the online TONEX community, users are also able to instantly play over 1000 Premium Tone Models that have been created by IK Multimedia using their collection of the world’s most sought-after amps and pedals. 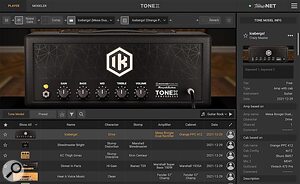 Lastly, Tone Models will be available in a new dedicated section of ToneNET, IK Multimedia’s online sharing and social platform which offers browsing, demoing and instant downloading of both Premium Tone Models and user-created content.

In keeping with other software offerings from IK Multimedia, three versions will be available, each with the same features but equipped with a different number of Premium Tone Models included: TONEX SE (200 Tone Models), TONEX (400 Tone Models), and TONEX MAX (1000 Tone Models). There will also be a free version available, allowing everyone to try out the capability of the new modelling technology. 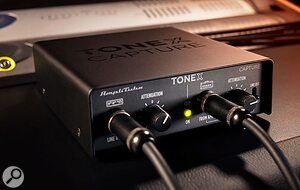 The TONEX Capture is a hardware device that allows users to model their own amps and effects using the new software.Tone Models can be created in TONEX using a modern computer equipped with a regular audio interface, and minimal additional equipment. IK Multimedia say that their AXE I/O interface is an ideal candidate thanks to its dedicated Amp Out feature. To make it easy for anyone to create Tone Models, the company have created TONEX Capture, an all-in-one hardware device that takes a signal from the line output from a standard audio interface and provides a feed to a guitar amp.

The unit can then be inserted between the amplifier’s output and cabinet, and will send a modelled signal back to the user’s interface via its line output whilst allowing the amp to operate normally. The same process applies for modelling effects pedals, and as well as the Tone Model capability the TONEX Capture also doubles up as a standard re-amping box.

The software versions, along with the TONEX Capture will all be released in September, and are currently available to pre-order for special introductory prices.