IK Multimedia have announced that their AmpliTube TONEX amp and pedal modelling software is now available for iPhone and iPad users, both as a standalone app or an AU plug-in for mobile DAWs such as GarageBand, Cubasis 3, Auria Pro, and many more.

The new app version offers all of the same controls as the Mac and PC version, allowing users to fine-tune their Tone Models and adjust the settings of the built-in compressor, pre- and post-amp EQ, noise gate and five stereo reverbs, all of which are powered by the company’s latest award-winning algorithms. Built-in VIR cabinet technology also provides the ability to place and adjust virtual microphones, with all edits within the app able to be saved as presets. 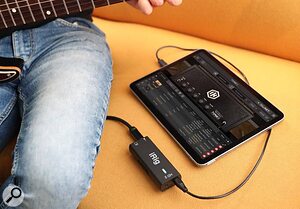 The new TONEX app offers iPhone and iPad users the same sounds and control as the desktop software, and can be used as either a standalone app or an AU plug-in for mobile DAWs.The app is fully integrated into the TONEX ecosystem, and will seamlessly stay in sync with the Mac and PC versions so that users always have their collection of sounds ready to play at any moment. A purchase of an expansion pack or version upgrade on one platform is automatically reflected on another, and becomes instantly available.

Users can also explore the expanding collection of Tone Models in the new TONEX section of ToneNET, IK Multimedia’s online sharing platform, directly from their iPhone or iPad. Once a ToneNET account has been created, it is possible to instantly search, filter, demo and download a massive range of user-generated Tone Models. Any model that has been shared via the desktop version of TONEX can also be downloaded and played with the app.

IK Multimedia say that the app is also ideal for users of their iRig devices, with selected models such as the HD 2, Pro I/O, Pro DUO I/O, and Stomp I/O, as well as the company’s AXE I/O and AXE I/O Solo interfaces, now shipping with a licence for TONEX SE included.

We’ve been putting the desktop version of the software though its paces here at SOS, with an in-depth review planned for an upcoming issue.

AmpliTube TONEX for iPhone and iPad can be downloaded for free from the App Store, with 20 Tone Models and 20 user-created Tone Model downloads included. A further 10 Premium models are then available upon registering the app with IK Multimedia. Additional packs are available to purchase, with Clean, Drive, Lead, and Metal varieties available, each containing 35 Premium Tone Models, plus 35 downloadable user-created models. There are also TONEX SE, TONEX, and TONEX MAX bundles, which contain 200, 400, and 1000 Premium Tone Models respectively, and each allow unlimited downloads of user-created content.

Pricing information, with the currently available (17 November 2022) discount offers, is as follows: