Modartt have announced the release of Pianoteq 8, the most recent version of their award-winning virtual instrument. The plug-in features physically modelled instruments that are able to simulate both the playability and complex acoustic behaviour of real instruments, and only occupies a fraction of the disk space required by sample-based instruments, making Pianoteq an ideal solution for mobile laptop setups. 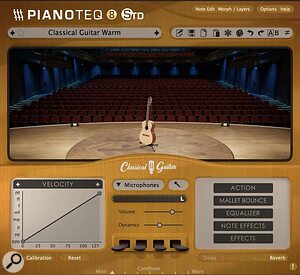 In addition to the refreshed GUI, Pianoteq 8 includes a new Classical Concert Guitar instrument model.A key feature of this latest version is the introduction of the Classical Concert Guitar instrument pack, providing users with a new category of modelled instruments, complete with emulated gestures and natural instrument noises that promise to deliver breathtaking realism. The pack also features a user interface that has been designed to be easy to navigate and offer an intuitive playing experience for non-guitarists. A range of presets are included, providing sounds that range from a 12-string acoustic guitar, to a Greek bouzouki, and even an electric guitar.

In addition to the newly introduced sounds, all of the existing contemporary acoustic pianos have been re-voiced, along with the Vintage Reeds and Concert Harp models. Modartt say that this has resulted in increased authenticity and playability, with all of the updated instruments being tailored to suit the needs of demanding projects and performances. Pianoteq 8 also offers a fresh, streamlined GUI, which has been designed to offer enhanced readability and usability, and more control is on offer via a new Note Effects panel, which is equipped with Tremolo and Vibrato parameters.

Modartt say that their long-awaited iOS app is also in progress, and will be compatible with Pianoteq 8.

Pianoteq 8 is supported on PCs running Windows 7 or later, Macs running macOS X 10.11 or later, and Linux (x86 and ARM architectures). It is available in AU, VST3, and AAX formats, and also features NKS support for integration with Native Instruments’ range of hardware controllers.

Pianoteq 8 is available now, and Modartt are currently offering 25% introductory discounts on all versions, as well as discounted upgrades and crossgrades for existing users. Pricing information (without the current discounts applied) is as follows:

*Require a Pianoteq licence, and are not included in the current discount offer.