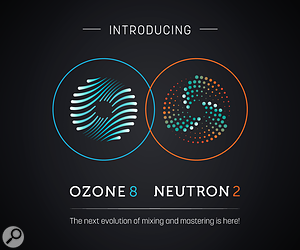 Boston-based DSP experts iZotope have unveiled the next step in their mixing and mastering processor series with the joint release of the Neutron 2 mixing console and Ozone 8 complete mastering suite, as well as the Music Production Suite.

Of note, the Advanced versions of Ozone 8 and Neutron 2 can now communicate with each other through the new Tonal Balance Control plug-in. This paired with improved visual and analysis tools should help you make better decisions during mixing and mastering.

Ozone 8 introduces loads of new and industry-first features. These include the Tonal Balance Control plug-in which lets you control any track processing from a single instance; Master Assistant which lets you create a custom preset for getting your audio to an optimal starting point; Spectral Shaper which provides tools for taming problematic and harsh frequencies; the ability to A/B track references in any instance of Ozone; Deeper control in Ozone’s Maximizer with new low-latency IRC mode, Transient/Sustain Stereo Independence, and Learn Threshold

Meanwhile, Neutron 2 is designed to let you control every aspect of your music, from the visual soundstage of your tracks to the tonal balance of your mix

Like Ozone 8, Neutron 2 features the Tonal Balance Control plug-in allowing visual analysis and communication between all instances of Neutron. The new Visual Mixer also allows you to visualise your entire soundstage, controlling the pan, width, and gain of individual tracks.

The Track Assistant feature has been improved and updated to help you get to an optimal starting point for your mix. And the Mix Tap function lets you add any track to the Visual Mixer, Masking Meter, and Tonal Balance Control plug-in (even tracks that don’t have additional iZotope plug-ins running).