Interestingly, the 16 pads can be assigned various functions. A built-in sampler allows you to record via a line input and assign the recorded samples to the pads. They can also be assigned to play back samples from an SD card or even to play back entire backing tracks for you to play along to.

With an impressive 120 voices of polyphony (40 more than its predecessor), it’s possible to create complex arrangements using the built-in 16-track sequencer. With other features including a step sequencer, arpeggiator, a drum track with 772 preset drum patterns and a 1/4-inch mic input, this is a workstation to contend with. Kross Editor and Plug-in Editor software allow editing of many parameters at a glance and also lets you use the Kross 2 as a soft synth within you DAW. The 61-key version will be available in black or marbled red and will cost £689, shipping in August and September respectively. The 88 key version comes in dark blue livery and will be available in October for £969. 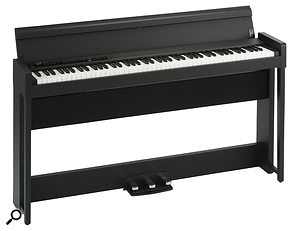 The C1 Air digital piano (£969), is a slimline affair that features 30 instrument sounds, Bluetooth audio streaming and on-board recording facilities. The two-track recording feature even allows you record each hand separately for performance analysis and practice. Korg also claim that their RH3 real weighted hammer-action keyboard accurately simulates the touch and response of an acoustic piano. It even features a heavier playing feel in the lower register that becomes lighter as you move up the keyboard. And, while it sports speakers powered by two 25W amps, silent practice is possible with headphones.

Finally, Korg have also announced two new arranger keyboards: the Pa700/Pa700 Oriental and the Pa1000, respectively beefed up versions of the Pa600 and Pa900. What sets apart the Pa700 (£1149) and Pa700 Oriental (£1239) is the selection of onboard sounds, the latter being preloaded with musical resources from Middle Eastern countries. Both feature 61 velocity-sensitive keys and a 7” TFT display. New for the Pa700 is an expanded number of user Style locations (now 1152) and the addition of Kaoss FX. The Pa1000 (1769), meanwhile, provides over twice as much PCM memory with 600MB, and also features the TC Helicon Vocal Harmonizer, a Dual MP3 player & recorder, and the Dual Crossfade Sequencer.