Published 15/3/07
Korg announce a swathe of gear at NAMM
Sound On Sound first caught a glimse of Korg’s new products at a special ‘behind closed doors’ event in December 2006 at their Tokyo HQ. A month later, they have formally announced them at NAMM. Here’s the low-down: 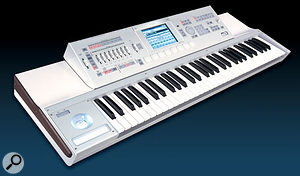 The flagship of the release schedule is undoubtedly the M3 synthesiser/sampler with its radical new silver and white design. Based on a chip that is, in essence, the HD1 synth engine (which also lies at the core of the OASYS), it offers all the facilities that you would hope for in a hardware workstation, with thousands of sounds, up to 320MB of sample memory, 120-voice polyphony, a 16-track sequencer, a Mac and PC editor, and KARMA. Expandable with the EXB-RADIAS board, it can also produce an extensive range of analogue-type sounds. Usefully, for those who already have an adequate master keyboard or a limited amount of space, there is a keyboardless M3, called the M3M. Larger M3 models allow you to place two modules (an M3-M and a Radias-R, for example) side-by-side on the 73-note version, or even two M3-Ms on the 88-note version, extending a concept first seen on the original Radias keyboard. With optional Firewire and USB-PCM boards in development, it’s clear that the M3 is not just the cut-down OASYS that many people prophesied, but a major new instrument in its own right. 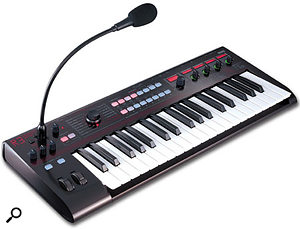 Alongside this, the diminutive R3 synthesizer/vocoder is derived directly from the Korg Radias. With a cut-down specification based around a three-octave velocity- (but not pressure-) sensitive keyboard, a bi-timbral version of the Radias’s MMT synth engine, and 8-note polyphony, the R3 is nonetheless a very competent synthesizer with a huge palette of sounds. It also allows you to process external signals, and comes complete with its own gooseneck microphone for vocoding. At a very affordable proposed price, this could, like the Microkorg of recent years, become one of the most popular Korgs of all time.

If lumps of hardware are not your thing, Korg has surprised no-one by adding a Mono/Poly software synth to the Analogue Edition of its Legacy Collection to create the Legacy Analogue Edition 2007. Instantly recognisable as an on-screen derivative of the Mono/Poly, this can be used in a limited fashion to recreate the sounds of that synth. However, Korg has not stopped at mere emulation, and has extended the paradigm with a powerful modulation matrix, effects, a massive 16-voice unison mode, and up to 128-note polyphony. 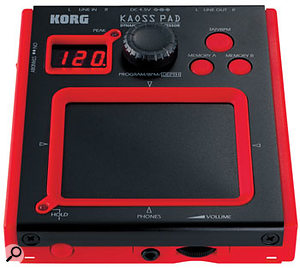 Smaller even than the CD on which the Legacy collection resides, the new Mini KP is the smallest and lightest Kaoss Pad yet. It retains much of the functionality of other models and offers 100 effects, including filters, flangers, delays, distortion, pitch shifting, reverb, looping and more, as well as sound generation based on a simplified synth engine. Weighing just 5oz (154g), the Mini KP will run for up to five hours on AA batteries, or can be powered from an optional AC adapter. Expect to see lots of them in the clubs soon.

Staying with small products for a moment longer, it’s easy to overlook things such as guitar tuners and metronomes but, over the years, Korg has sold millions of these tiny essentials. There are four new models for 2007. The GT4 guitar and bass tuner and DT4 chromatic tuner are roughly the size and shape of a traditional stopwatch, but both offer a microphone in addition to a line input, plus bright LED displays and three different tuning modes. The larger LCA120 has an expanded specification including a volume meter and the ability to generate reference tones, while the LMA120 (which uses the same case and screen) is an innovative metronome that will imitate a conductor’s motion on its large LED screen. No doubt, Korg will sell millions more.

Finally, Korg unveiled what may prove to be the highlights of the company’s releases in early 2007: the Zero4 and Zero8 ‘live control’ mixers. These 24-bit, 192kHz digital processors combine traditional mixing, effects, and MIDI control in a single unit, and allow you to define each channel strip as audio only, MIDI controller only, or audio+MIDI. 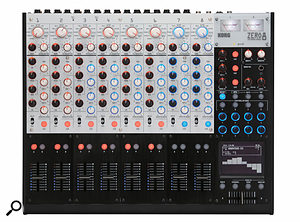 The more affordable Zero4 offers a wide range of analogue and digital inputs and outputs, including a phono preamp for turntables, mic preamps, and a Firewire connection that will carry audio and MIDI to and from a Mac or PC. It also has a dedicated insert effect on each channel, a master effect, and a simple loop sampler. Not just a Zero4 with more channels, the Zero8 specification adds further I/O, much more in the way of effects, and a Kaoss-style screen that allows users to manipulate these in real-time.

Both Zero mixers will be supplied with Korg’s Zero Edit software that allows you to assign almost any MIDI message to almost anywhere on the control surface, and Korg suggests that users should treat both products as instruments rather than signal processors or controllers. Whether this is hype or not is down to you: if DJs are musicians, then these are probably instruments.
Look out for the forthcoming reviews of these new products in Sound On Sound. Gordon Reid

Mastering Essentials Part 3 - How loud should I master?
18 hours 41 min ago.