Published 29/11/04
Propellerhead release first details of new version
The first concrete details of next major update to Propellerhead’s Reason software have been revealed. And the news is that version 3 will contain several new features designed with live performance in mind.
For example, the new Combinator module (pictured below) allows users to construct chains of Reason instrument, effects and sequencer modules and save them as a combi patch. Users can thereby recall complex setups instantly.
Propellerhead have for a long time been resisting requests from many users to incorporate audio recording and other DAW-type features into Reason, and there’s no change to their stance in version 3. Indeed, Propellerhead make it clear that they see Reason as the software alternative to a hardware workstation synth, with the same capabilities for composing, production and now live performance too.
Another new module is MClass, a mastering suite featuring a four-band parametric and shelving EQ, a compressor/maximiser and a look-ahead limiter. Other notable new features in version 3 include a new, expanded soundbank, with more multisampled instruments and a range of combi patches, a new browser featuring text searches, Favourites folders and audition play of all samples and patches via MIDI, and out-of-the-box integration with most major control surfaces, including support for motorised faders and controller displays.
Reason v3 will be available in early 2005. 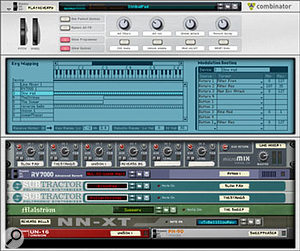