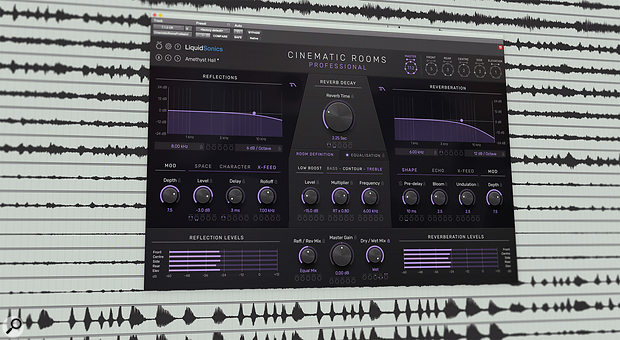 London-based reverb specialists LiquidSonics have an excellent reputation for simulating real spaces in plug-in form, but their newest product — Cinematic Rooms — differs from their usual repertoire in two important ways.

While previous LiquidSonics plug-ins have offered some of the features of algorithmic verbs (by cleverly combining a convolution engine with traditional signal processing), Cinematic Rooms is their first-ever all-algorithmic plug-in, and a quick look at the UI shows just how deep its parameters go.

The headline feature, though, is its surround-sound and Dolby Atmos compatibility. Cinematic Rooms can operate in channel formats from simple stereo all the way up to 7.1.6-channel Atmos, via a number of two-dimensional surround formats including quadrophonic and 7.1. It's available in two editions, Standard or Professional, with the latter benefitting from more presets (including some aimed specifically at post-production), surround-plane parameter editing, a reverb echo effect, an enhanced reflection engine, width control, and crossfeed disparity definition. The Standard version appears to offer most of the important features, however, including all the same surround modes, and all the major reverb parameters.

LiquidSonics Cinematic Rooms is available now, in VST2, VST3, AAX Native and AU formats, and is authorised via iLok 2 or 3. It costs $399 for the Professional version or $199 for Standard, but until the end of June you can pick them up for just $249 and $129 respectively.

Cinematic Rooms has already got some impressive endorsements, including from score mixer Alan Meyerson (The Lion King, Dunkirk, Blade Runner 2049) and recording engineer Steve Genewick (Aerosmith, Bob Dylan, Queen), and though we've not used it ourselves, if it's anything like their previous plug-ins it'll be very good indeed.