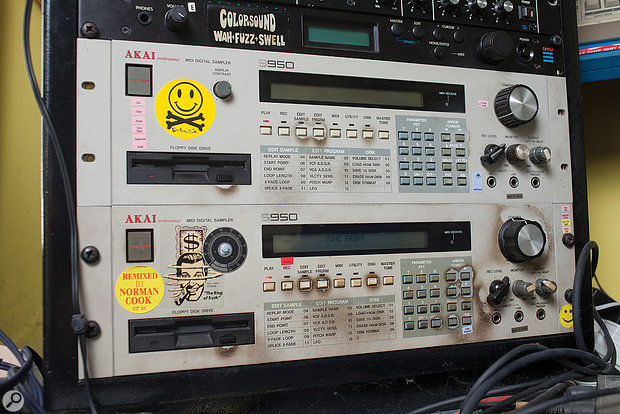 The second-hand prices of vintage samplers like the Akai S950 and E-mu SP-1200 have shot up lately, and it's safe to say that has nothing to do with their memory specs! Countless music genres, from hip-hop to happy hardcore, were built around the use of early hardware samplers, which typically had low bit depths (the classics operated at 12-bit) and low sample rates that severely restricted their frequency responses.

Those early A-D and D-A converters imparted a distinctive gritty sound on samples, and it's that sound that plug-in makers Beatskillz have emulated in their new plug-in, SampleX. Beatskillz say it can reproduce the sound of almost any digital sampler, and to that end it allows you to adjust the audio's bit depth (from 24 to a crunchy 4 bits!) and sample rate (as low as 2kHz).

Without the luxury of headroom that modern converters provide, users of early samplers had to drive the inputs pretty hard — and that's something else that SampleX emulates. An on/off switch lets you simulate the sound of an Akai S900's input stage being pushed to its limits. 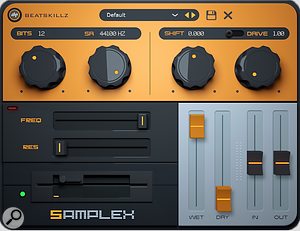 Other controls include Shift, which lets you tune the aliasing cause by the reduced sample rate. This lets you emulate the old trick of sampling records at high speed to save on memory, then pitching them down in the sampler to keep the original pitch and duration — only with rather finer control.

The plug-in's input and output levels can be adjusted independently, while separate Wet and Dry sliders let you apply processing in parallel to taste.

Finally, SampleX has a virtual analogue filter, which aims to recreate the sound of the 24dB/octave low-pass filters found on Akai's S-series and MPC samplers. Like on the originals, this filter can be coerced into self-oscillation by turning the resonance all the way up.

All those parameters will be welcome to those who like to fine-tune their tone, but if you simply want the sound of a classic sampler, SampleX has you covered too: it ships with a generous selection of presets that cover specific hardware models, including the Akai S612, S900, and S950; and E-mu's SP-12 and SP-1200.

SampleX is available now for the introductory price of $39 (normally $69). Click the video below to hear it in action.