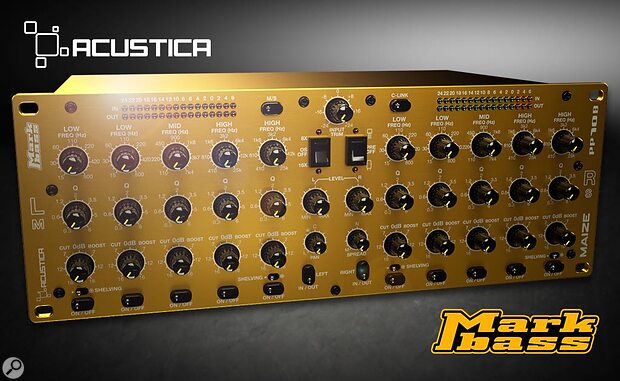 Acustica Audio have released Maize, a recreation of the incredibly rare Markbass PP10 parametric equaliser, of which there are only two units in the world. The is the latest in their series of Acqua plug-ins, which are all developed using an exclusive sampling technology that Acustica say produces results that sound almost indistinguishable from the original devices.

Developed in collaboration with Markbass, Maize replicates all of the main features of the PP10. The plug-in has EQ ten bands each with 19 selectable frequencies, a gain control that provides cut and boost from -16dB to +16dB, and a Q control that ranges from 0.3 to 6, allowing precise correctional EQ work. Acustica have also added some functionality not found on the original device, including Mid-Sides operation, Input and Output meters, and band activation buttons.

The Maize plug-in comes in a standard version, and also includes a ‘ZL’ (zero latency) version suitable for use during tracking, at the expense of additional processing resources.

Maize is available now, with an introductory price of 69 Euros until May 26th 2022, after which it will increase to 109 Euros.

Check out the demo video below to see and hear it in action.