Making in-Rødes into the iOS market Skip to main content

Making in-Rødes into the iOS market 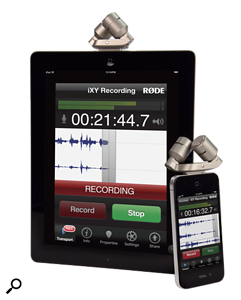 Rode iXY iOS stereo microphoneRøde have just revealed UK pricing for their iXY stereo microphone system for iPhone and iPad. The hardware will cost £169 and the accompanying app will cost £3.99 from the Apple App Store. There will also be a free app with fewer features available for free.

It's worth noting that Tascam and Fostex both have similar iPhone accesories, each costing around £100 less, but this is the first iDevice accessory of this type to be brought out by a dedicated microphone maker. If the audio quality is as good as Røde claim, it could be a worthy contender in the field recording ring.

The iXY is compatible with iPhone 4 and 4S and any iPad with the older style 30-pin dock connector. Unfortunately that means that if you're using an iPhone 5, iPad Mini or the latest iPad, you're out of luck for now.

For more from Røde, see below.

Press Release: Australian-based audio company RØDE Microphones has announced the iXY, a stereo microphone for iPhone and iPad with 30-pin connector that allows high quality recording at sampling rates up to 24-bit/96kHz, the only microphone on the market to do so.

At the heart of the iXY is a matched pair of 1/2” cardioid condenser capsules, fixed in a perfect 90 degree ‘near-coincident’ alignment resulting in immersive and true-to-life stereo recordings, captured in incredibly high detail. The iXY uses its own high-fidelity analogue to digital conversion ensuring all recordings are rich, smooth and accurate.

The iXY’s small form factor and incredibly detailed performance makes it the perfect microphone for recording live music, meetings, lectures, reporting, dictation and sound design, and also is ideal for use on-camera as a dual-system recorder for DSLR.

A foam windshield is provided for outdoor recordings, as well as a rugged zip pocket to ensure the mic is always around when you need it.

“I’m more excited about iXY than any other product in RØDE’s twenty year history,” commented Peter Freedman, RØDE’s Founder and President. “The audio quality of the iXY is breathtaking and really affirms RØDE’s commitment to providing the very best audio products available at a price that’s accessible to the general public.”

Released in conjunction with the iXY is RØDE Rec, an app for iPhone, iPad and iPod touch designed to be the ultimate companion to RØDE’s new microphone. When used together the iXY and RØDE Rec transform an iOS device into a fully featured field recorder.

RØDE Rec allows for complete control of the iXY’s continuously adjustable input levels for recording in loud and quiet environments, as well as the high pass fi lter to cut out low frequency rumbling such as air conditioning or outdoor traffic noises.

The RØDE Rec App is available for purchase from the App Store on iPhone, iPad and iPod touch or at www.itunes.com/appstore. The app provides a full suite of features including multiple sampling rates up to 96kHz, equalization effects (compressor/expander, high-pass filter, low pass filter, parametric EQ), non-linear editing, geo and photo tagging, and one touch publishing to SoundCloud, Dropbox, email, FTP and iTunes. RØDE has also announced a feature-limited free version of the app, simply titled RØDE Rec LE.