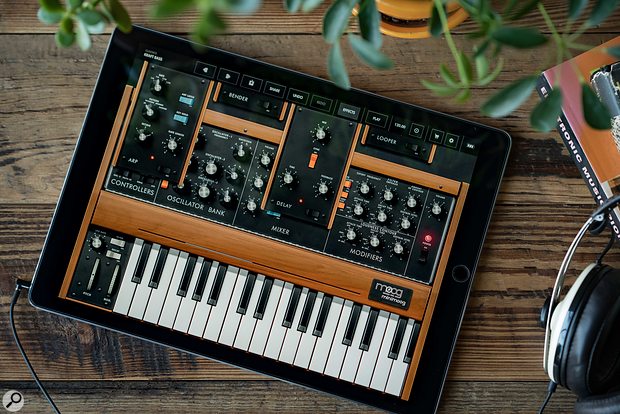 Moog’s iconic Minimoog Model D is undoubtedly one of the world’s most famous synthesizers, inspiring a plethora of imitations — both hardware and software. Now, Moog have created their own virtual take on the venerable analogue monosynth, exclusively for iPad, iPhone and iPod touch, .

With the Minimoog Model D App, Moog are aiming to capture the magic of the original hardware, and have done so by employing real-time modelling. Moog have been exacting about their modelling of the Minimoog Model D, too, as iOS Product Manager Geert Bevin outlines: "We combine various techniques to model it as a complete instrument. Some elements are component-level, some are module-level, and some actually model the interaction of everything in order to achieve the analog vibe and feel."

While the interface is as transparent as the original hardware, for those less familiar with crafting sounds from scratch, you can jump straight in and play with over 160 included presets. Hundreds more presets are also available in the Minimoog Model D App Store.

Moving to the iOS platform has allowed Moog to make some useful additions including a number of sound creation tools and capabilities not present on the original. These include the ability to play chords of up to four notes at once, an arpeggiator module for rhythmic pattern creation, a real-time looping recorder with unlimited overdubs, a tempo-synchronizable stereo ping-pong delay module, and the ‘Bender' — described in the promo material as "a brand-new wide-range time modulation effect module.”

The Minimoog Model D App also integrates with mobile DAWs, say Moog. With AUv3 Audio Unit extension support, multiple instances of synth app can be used simultaneously within multi-tracking iOS apps such as Apple’s GarageBand. Also, as Trent Thompson of Moog explains: "The Minimoog Model D App can be used with any MIDI controller (including Bluetooth) and also supports MPE. Additionally, there is a “Map CC” page in the Settings menu that allows users to easily assign any controls from their MIDI controller directly to functions in the app."

If you missed out on the limited production run of hardware Minimoog Model D synths, or simply couldn’t afford the $3500£3000+ price tag, then this could well be for you...