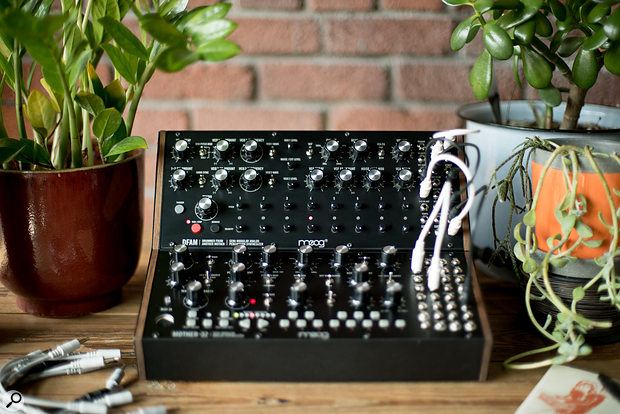 At last year’s Moogfest celebration, a handful of lucky attendees were able to build their own limited edition Moog percussion synth. Dubbed the DFAM — short for Drummer From Another Mother — the synth generated a lot of interest and whistful comments from across the web. Would it ever be released to the public? Well, the answer is now a resounding "yes".

Moog are calling the DFAM a “vibrant deviation from the traditional drum machine” and that’s probably not an overstatement. For a sense of how it sounds, check out Moog’s own launch video below.

Creating timbres that cross the boundary of bass and drums, the DFAM features an analogue eight-step sequencer, a white noise generator and two wide-range analogue oscillators. Oscillator hard sync and FM cross-modulation invite effortless transitions between rhythmic pulsations, resounding bass and resonant bells in an instant. The DFAM’s voice can then be shaped by a Moog Ladder filter with two selectable modes. Low Pass mode is suited to impactful kicks and basses while High Pass mode opens the door to strikes, spikes and more.

It features three dedicated analogue envelopes working dynamically with the sequencer. While the DFAM requires no patching, further options for sonic sculpting can be unlocked via the 24-point modular patchbay. Use it to create new sounds or bizarre behaviors, synchronise an unlimited number of DFAM and Mother-32 units together, or fully integrate your analog instrument into a modular Eurorack production environment.

Because it shares dimensions with the Mother-32, it will happily sit in the 2- and 3-tier Mother-32 racks offered by Moog. If you want to put one in your Eurorack rig, it will take up 60HP.