Music Expo SF  (in association with Sound On Sound), the conference for music makers and the only event of it’s kind and caliber in Northern California, today announced its return to Ex’pression College, Emeryville on Saturday, 12th November 2016. Early bird registration and exhibitor/ sponsorship  sign up for the 2016 event is now available. 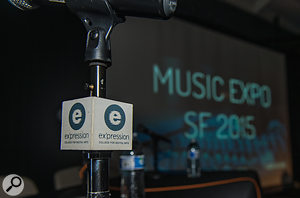 This year’s Music Expo SF, the sell­out annual conference for musicians, producers, engineers and taste makers, which launched in 2014, will have an exclusive media partnership with Sound On Sound magazine to bring attendees, exhibitors and sponsors alike an even bigger and better event. “ The past two years have been a resounding success for all involved with each Expo attracting over 400 attendees, as well as sponsors and exhibitors from all corners of the music industry. Thanks to the help of our renowned partner Sound On Sound magazine, this year we expect to double that number and put on an even more impressive day of music events for everyone in the music business. We are delighted to have the support of the world’s #1 music technology magazine,”  commented Music Expo Founder and Executive Producer, Loic Maestracci.

There will be even more artist keynotes, more product demos, more masterclasses from the best in the industry, bigger networking opportunities and another remix contest that will give artists the opportunity to be heard by some of the most highly­ esteemed players in the industry. “ We’re excited to endorse and exclusively partner with Music Expo SF this year! It’s great to be even more involved in such a conference, which really brings the Northern Californian music industry together and gives people a place to learn, collaborate and perform,” said Nick Humbert, International Business Development Manager for Sound On Sound magazine.

All of the 2015 exhibitors plan to return in 2016, plus many more, bringing together some of the most prominent brands in the industry under one roof. And while the speakers and performers list is yet to be announced, attendees will no doubt have the opportunity to rub shoulders with and hear from some of the biggest names on the NorCal music scene. New exhibitors  and sponsors who are interested in being involved in Music Expo SF 2016 can get 10% off on any package if they sign up before June 1st.

Back again this year by popular demand is the Music Expo SF Remix contest. Artists will once again get the opportunity to put their remixing skills to the test and have them reviewed by a panel of influential producers and musicians for the chance to win some impressive gear. Sign up at musicexpoSF.com  to find out more.

Mark 12th November 2016 on your calendars now for what’s sure to be an unmissable Music Expo SF 2016 , in association with Sound On Sound magazine. Get ahead of the crowd and secure your spot now, early bird passes start at $15, but will go up to $25 on July 1st. To find out more visit www.musicExpoSF.com.