Published 16/1/09
NI get into the groove
Having first dipped their toes in the hardware-manufacturing pool some years ago with products such as Kore and Guitar Rig, Native Instruments have announced what looks to be their most extensive hands-on product yet. Maschine is part-hardware, part-software, the main part of which is a controller that connects to a Mac or PC via a USB cable. This controls a piece of software that has a variety of features designed to appeal to both fans of the classic drum machines and grooveboxes of the ’80s and ’90s, and ultra modern sound-manglers alike. 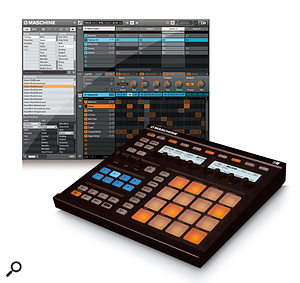 The controller has 16 touch-sensitive trigger pads, which have polyphonic aftertouch and LED backlighting. These control samples assigned in the software, and can be set to run in step sequencer mode, or as simple, playable pads. They can also be set to control other functions, by using modifier keys. A suite of 20 effects, including filters and delays, are built into the software, and a pair of LCD screens on Maschine’s hardware controller feed back parameter information, while a bank of eight rotary encoders enable the user to tweak settings without touching the mouse.

Delving deeper into Maschine’s functions, users can sample and re-sample from internal and external sources (relying on the user’s existing audio interface) on the fly, and automation can be recorded and edited during playback. There’s even a keyboard mode for playing tonal material, and the hardware isn’t locked to the software — it acts as a fully assignable MIDI controller for any DAW — so it can be used to control your favourite virtual drummer software application. What’s more, Maschine works either as a plug-in or as a stand-alone application, and it comes with a 5GB library of samples to suit “electronic and urban” styles, so the system can be used on its own as a live performance tool.

The developers say that Maschine will be on sale on the 1st March, (there’s something to be said for German efficiency!) at a cost of 599 Euros, which was £536 at the time of writing. More details can be found at www.native-instruments.com/maschine.info.

Also new from Native Instruments is Reaktor Spark, a SoundPack for Kore 2 and Kore Player, the latter of which is free to download. It was conceived, say NI, “to create a synthesizer with a highly energetic sound character and maximum potential for real-time expression”. As such combines “powerful subtractive synthesis with a sophisticated array of internal feedback loops and various other special sound shaping features”, all from the Reaktor sound engine. It costs 49 Euros (£43) and is available now from NI’s on-line shop.