Published 16/1/09
Making MIDI sexy
Like a milestone planted beside a well-trodden trading route, the Musical Instrument Digital Interface (MIDI) protocol has remained pretty much intact after a quarter of a century of use. Various developments to the standard have been made over recent years, such as the facility to transmit over USB and Ethernet, but the basic principles still exist in their original form. So wide is its grasp, it’s fair to say that the majority of DAW users have MIDI intrisicly knitted into their studio infrastructure, whether as a network of MIDI sound modules, or a single USB cable running between the master keyboard and the host computer. MIDI is useful, but it's not sexy.

One company that have taken MIDI by the scruff of the neck, put it through college and dressed it in a pretty frock is Novation. Their Automap software, which transforms Novation’s SL products and the Nocturn controller from passive MIDI devices into interactive DAW command stations, is so clever that the designers won a coveted Queen’s Award for Innovation, which is not to be sniffed at. 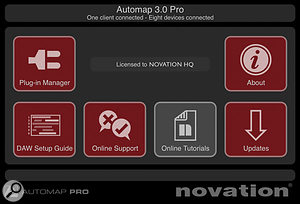 The big news from Novation at NAMM this year is Automap 3 Pro, which the developers describe as “a new benchmark in intelligent control”. With the new version, multiple Automap controllers can be used together to access the parameters of different plug-ins simultaneously, so users could have individual, dedicated hardware controllers for each of the inserts in a DAW channel strip, for example. Other new features in Automap 3 Pro include the ability to drag-and-drop parameters, for easy re-assignment of controls, and a technology called Autoview, which only displays the Automap GUI when the controls are in use. Also, a new integrated HUI control mode enables HUI-compatible DAWs to be controlled directly through Automap.

Automap 3 Pro will be available to current users for £20 or $30 from the Novation web site. A ‘standard’ version of Automap 3 is also available free of charge, but it doesn’t have the facility to drive multiple controllers.
American Music & Sound +1 800 994 4984
www.americanmusicandsound.com
Novation +44 1494 462246
www.novationmusic.com
Previous storyNext story