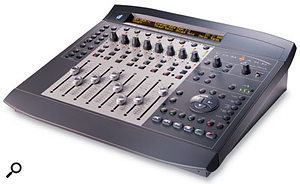 The latest product of the on-going collaboration between Digidesign and Focusrite is the Command 8, a USB control surface for Pro Tools HD and LE systems running on Macs or PCs. It’s intended for LE users who want a bespoke control surface for their system and for HD users who don’t have the space to install one of the larger HD controllers — the Command 8 is no wider than a standard rack space.
In terms of looks, the Command 8 is strikingly similar to the Digi 002 (it has the same stylish motorised faders, for a start), but, in terms of technology, it borrows equally heavily from the Focusrite-designed Control 24. In addition to the eight touch-sensitive faders, there are eight rotary encoders with LED rings to display position, eight Mute, Solo and Select buttons and eight five-segment LED level meters. There are dedicated transport controls, a cursor and numerous buttons allowing seamless integration with Pro Tools software. For example, at the touch of a button, users can call up various different window views, switch the control surface to adjust EQ, dynamics and effects, select fader banks (1-8, 9-16 and so on) and perform numerous other tasks, such as zoom, nudge, punch in/out or loop record. A long two-line LCD screen displays information relevant to the parameters being adjusted.
The Command 8 is also equipped with a MIDI In port and two MIDI Outs and it can act as a USB MIDI interface or a stand-alone MIDI controller for third-party software sequencers and synths. Though no USB audio interfacing is provided, the control surface’s monitor control section has two stereo analogue inputs, separate controls for main and aux speakers, and a headphone output. The Command 8 is expeccted to cost around £950 and should be available next month.
T Digidesign UK +44 (0)1753 655999.
F +44 (0)1753 658501.
E infouk@digidesign.com
W www.digidesign.com
Previous storyNext story