With the world in the grip of a ferocious heatwave all summer, the air con must have been running full blast at Native Instruments’ Berlin headquarters. The music technology giants have just announced a raft of new products, both hardware and software, across their Komplete and Maschine ranges. On the software side, NI have released version 6 of their Kontakt sampler and version 12 of their colossal Komplete bundle, as well as Massive X, the next generation of the popular virtual‑analogue soft synth. As for hardware, top billing goes to the Komplete Kontrol A-Series — three new keyboards that provide the most affordable entry point yet into NI’s NKS‑enabled smart controller range.

The Komplete Kontrol A25, A49 and A61 — £119, £159 and £199 respectively — do without the hi-res displays and multicoloured Light Guide LEDs found above the keys on their more costly cousins, but they retain the assignable touch strip and eight touch-sensitive rotary encoders, plus a context-sensitive OLED scribble strip, that work hand in hand with the Komplete Kontrol integration software. NI have additionally introduced the Maschine Mikro Mk3. This entry-level Maschine controller has been updated in line with the full-sized Maschine and now features the same choice of four play modes — drum, melody, chords or step sequencing.

A brand‑new synth built from scratch, Massive X flips the script on the original, highly successful Massive synth while promising to be just as influential. Developed by the same team, Massive X features two oscillators instead of three but provides the option to add more via the new insert section. There’s also one filter instead of two, though it does feature an interesting parallel‑state variable filter mode. An all-new audio routing section makes for even greater flexibility than the original Massive, providing drag-and-drop icons for all the sound generators, filters, effects, a new feedback bus and a bus for audio‑rate modulation of some of the filters.

Though it’s not quite ready for release, Massive X will be available to those purchasing Komplete 12, the latest version of NI’s flagship software bundle. While Komplete has previously been offered in three versions — standard (£479), the cut-down Select bundle (£159) and the mammoth Ultimate bundle (£959) — NI are now introducing a top‑tier Collector’s Edition (£1279), featuring even more instruments and effects, including their flagship sample-based strings. Meanwhile, Kontakt 6 introduces a new wavetable module, new library instruments and effects, including the Replika XT delay, and new Creator Tools to help instrument builders. 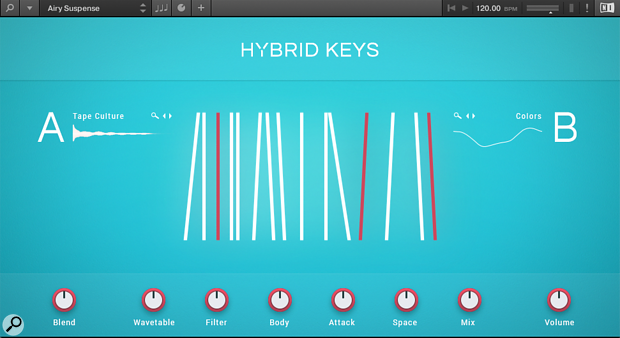 NI have also announced new Traktor DJ hardware which features an intriguing technological advancement — the Haptic Drive. Developed in-house, this electromagnetic drive mechanism allows the controller’s jog wheels to variously behave like a stepped rotary controller, a smoothly spinning platter or a scrub/shuttle control that springs back to centre position when released. If this is something that could be scaled down, it could be really useful in future control surfaces.