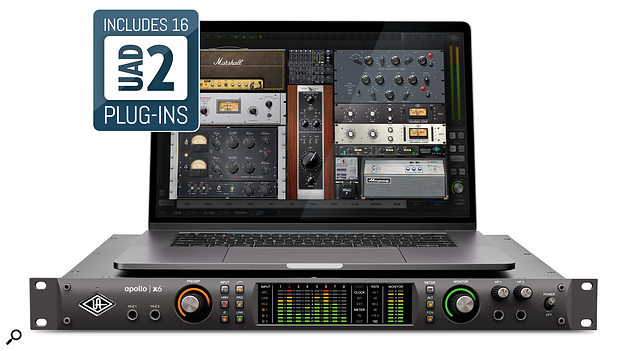 How do you improve on some of the most highly rated audio interfaces on the market? Universal Audio’s answer is to simply give us more of what we like. The new Apollo X range takes the successful Apollo blueprint and adds upgraded 24‑bit/192kHz A-D/D-A conversion and HEXA Core UAD plug-in processing.

With a total of six DSP chips on board — two more than any previous Apollo interface — UA promise 50 percent more plug-in processing power. Meanwhile, the company say their new “elite class” converters are capable of rivalling the most expensive dedicated A-D/D-A units.

The Apollo X range launches with four models, all 1U rackmounts and all using Thunderbolt 3, or Thunderbolt 2 via an adaptor. The Apollo x8, x8p and x16 follow the existing Apollo 8, 8p and 16 formats.

Interestingly, along with ADAT and S/PDIF digital I/O, the Apollo x6, x8 and x8p also feature two headphone outputs. Surround monitor capabilities (5.1 for the x6 and full 7.1 surround for the other three units) are slated for a forthcoming firmware update to all four interfaces. The Apollo X range can also be switched between +20 and +24 dBu reference level to interface with professional mixing consoles or retro analogue gear.

The Apollo X interfaces will be available very soon and we will be bringing you an in-depth review as soon as we've had some time with them.