Oberheim have announced that they have started shipping the OB‑X8. Announced back in May 2022 and unveiled at Superbooth 2022, the OB‑X8 is an eight-voice polyphonic analogue synthesizer that combines the classic sounds and features of Oberheim’s legendary OB‑X, OB‑Xa and OB‑8 instruments, and also includes all of the presets that gave those synths their signature sounds. 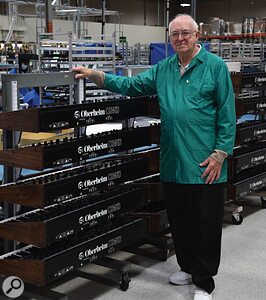 Founder Tom Oberheim with the first shipment of OB‑X8 synthesizers.Equipped with two discrete SEM/OB‑X-linage VCOs per voice and genuine Curtis filters, the OB‑X8 delivers the classic tones that Oberheim are renowned for. There are over 400 factory programs included, with the full set of factory sounds for the OB‑X, OB‑SX, OB‑Xa, and OB‑8 all on offer, and Oberheim say that the envelope responses have been meticulously modelled to match each OB model. The instrument features a 61-key Fatar touch- and velocity-sensitive keybed, and bi-timbral capability allows two presets to be played simultaneously (either split, or doubled).

“It’s an exciting day for Oberheim and for musicians that have been anxiously waiting for the OB‑X8 since we first announced it,” said company founder Tom Oberheim. “Naturally, we’re proud to reintroduce the Oberheim sound in a new instrument. But even more, we’re proud that we’ve been able to combine the voice architectures of the various original OB series synths in a way that gives players unique new sounds and capabilities that even the originals didn’t have. It’s an amazing-sounding instrument.”