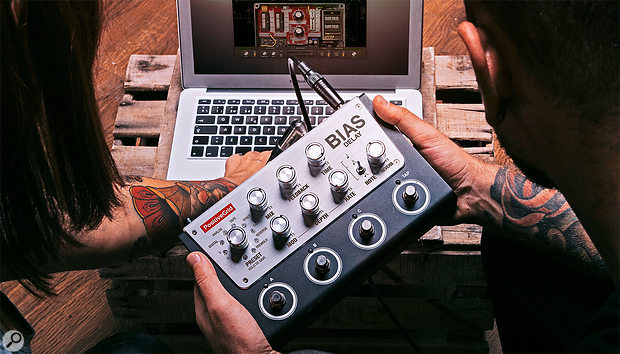 Positive Grid, the makers of BIAS Amp and BIAS FX have announced a hardware BIAS Delay pedal. A first of its kind, the BIAS Delay pedal works both as a standalone pedal and as part of an integrated desktop and mobile system, connecting to computers via its Micro USB port and to iPad via built-in Bluetooth. Using BIAS Delay pedal with the optional BIAS Pedal desktop (Mac/Win) software and iPad app, guitarists can deeply customise and remotely control the hardware’s effects parameters and share and download thousands of custom presets on Positive Grid’s acclaimed ToneCloud social network.

The BIAS Delay pedal’s wide variety of vintage and contemporary time-based effects—including Digital, Analog, Tape, Space, Reverse, Ping Pong, Swell and Tremolo delays and reverb—provide the nuts and bolts for further, deep tweaking of parameters in Positive Grid’s BIAS Pedal or BIAS FX software. After creating an arsenal of custom delay pedals in the supporting software, musicians can transfer them back into the hardware pedal’s two banks of ten presets each. Guitarists can also assign three favourite presets to the pedal’s built-in footswitches for instant recall.

The BIAS Delay pedal features an all-metal chassis and separate I/O jacks for left and right channels making it suitable for focused mono and wide stereo effects alike. It will be available in Spring for $349. Check out the intro video from BIAS below.