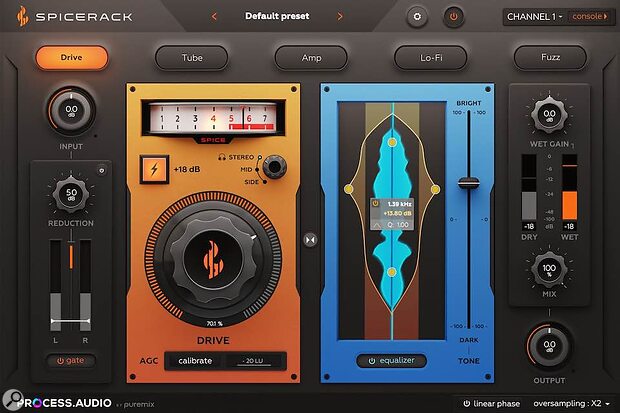 Process Audio have released Spicerack, a saturation and distortion plug-in equipped with five different types of harmonic distortion. Each algorithm have been carefully designed and finely-tuned, aiming to offer a wide range of sounds that will be useful to any engineer or producer.

Spicerack’s interface has been designed to allow users to apply the right amount of saturation as fast as possible, and is equipped with Auto Gain Compensation and Calibration features which allow the main Drive control to move between its minimum and maximum settings with no level jumps. The effect also uses the true linear-phase technology that Process Audio developed for their Sugar plug-in, which they say is a first for a parallel saturation plug-in, and yields unprecedented results when blending wet and dry signals. 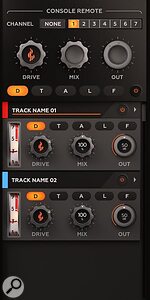 Spicerack's Console Remote feature allows multiple instances of the plug-in to be controlled from a single interface.The plug-in features Drive, Tube, Amp, Lo-Fi, and Fuzz distortion types, which can be selected via buttons placed along the top edge of the GUI. An input level control is followed by a Gate section which allows users to only apply processing to the loudest parts of the source signal. The next section houses the main Drive control along with its automatic gain settings, and also features a Drive Boost button which adds 18dB of gain prior to the Drive control. A selector switch allows users to choose which part of their signal to apply processing to, with Stereo, Mid, and Side settings available.

Next up is an EQ section which utilises linear filters to avoid cancellations when blending wet and dry signals. Low- and high-pass filters are on offer, as well as a peak and a tilt. The EQ’s graphical interface is displayed visually with a vertical graph rather than the usual horizontal type, and is placed next to a large Tone slider which can be adjusted to make the overall sound darker or brighter. The EQ can also be placed before, or after the Drive section. A button to engage the linear-phase mode is available at the bottom of the GUI, and using the mode will introduce more latency and use more CPU resources.

Parallel processing is then offered by a Mix control, which is preceded by a Wet Gain control, allowing users to adjust the volume of the processed signal before blending it with the unprocessed sound. Lastly, a Console Remote feature allows communication between multiple Spicerack instances within a single session, and provides control over each of them from a single interface.

Spicerack is supported on PCs running Windows 8.1, Windows 10, and Windows 11. Mac support extends from macOS 10.13 (High Sierra) through to macOS 12 (Monterey), with Intel and M1 CPUs supported. Authorisation is via iLok/iLok Cloud. AAX, AU and VST formats are available.

Spicerack is available now, priced at $149. Process Audio also offer a free 30-day trial for those wishing to hear the results for themselves.