Roland have expanded their range of home pianos with the addition of two new entry level models, the F107 and RP107. Featuring a keyboard action derived from higher-end models and offering the premium Roland piano sound, the manufacturer says both new instruments deliver authentic sound and expression that is unavailable in other pianos at this price point. A refreshed companion app for select models in the series is also being released alongside the instruments, connecting to the pianos via Bluetooth and offering remote control functions and enhanced learning features. 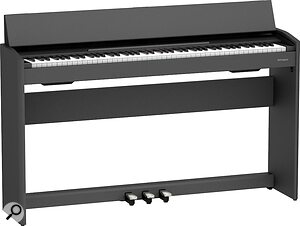 The F107 features a modern cabinet design.The F107 features a modern design based on the Roland F701, which the company say makes it a great fit for modern living spaces, whilst the RP107 sports a classic upright design which will suit those looking for a piano with a more traditional appearance. Aside from the cabinet design, both instruments offer identical features and a powered by Roland’s acclaimed SuperNATURAL Piano engine, which combines sampling and modelling technologies that reproduce all of the complex nuances of an acoustic grand piano. An 88-note PHA-4 keyboard provides a true weighted response, with both models equipped with sustain, soft and sostenuto pedals.

Both the F107 and RP107 feature onboard recording to allow players to check their progress and to share music, and a Twin Piano mode allows for playing alongside a family member, friend or teacher, whilst dual headphone outputs are provided and each equipped with their own independent volume control. Both pianos also feature USB ports to connect to computers or flash storage devices. 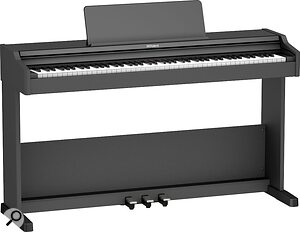 The RP107 features a more traditional cabinet design. Built-in Bluetooth audio and MIDI connectivity allows users to connect the instruments to the Roland Piano App, which has recently been redesigned based on user feedback. Available for both iOS and Android tablets and mobile devices, this app allows users to stream music to the onboard speaker system or explore music composition with MIDI capable apps such as GarageBand, as well as providing remote control over sound selection, metronome settings, recording and more. The app also includes interactive learning material and exercises, with users able to track their progress and set goals. Scores are included for the piano's onboard song library, and there is also an auto-accompaniment feature allowing users to play along with a full band sound.