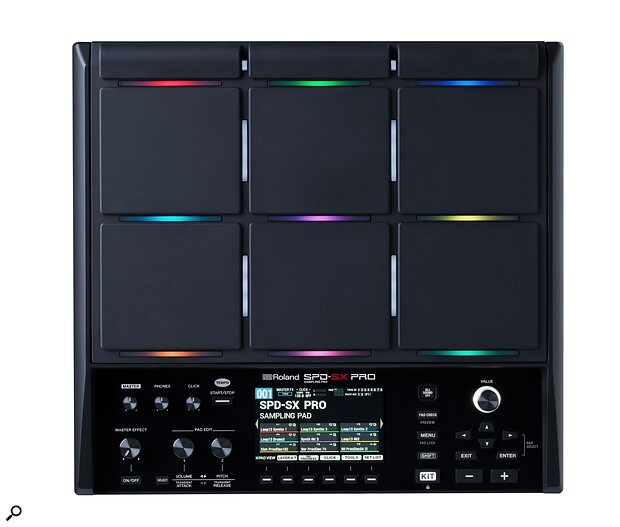 Designed with user-feedback at its core, the Roland SPD-SX Pro debuted today. Roland say they have answered sample pad users’ requests with a host of added features to create a durable sample pad suitable for professional use.

The SPD-SX Pro is the new top-of-the-line sampling pad from Roland, expanding their percussion pad range rather than replacing either the SPD:One or SPD-SX (reviewed in SOS October 2012), which will both remain available. The SPD-SX has become one of the most widely used electronic percussion pads since its launch, and Roland have listened to feedback from its many users and looked for solutions. Development of the SPD-SX Pro began in 2019, after it became clear to Roland what improvements sample pad users wanted making to a new version of the SPD-SX.

The SPD-SX Pro now has 32 GB of sample memory, a 16-step sequencer, on-board effects, improvements to trigger sensing of pads, more pad crosstalk protection and customisable, colourful LED backlighting as well as a clear 4.3-inch colour screen. Samples are played back in 48 kHz and the SPD-SX Pro delivers six mono outputs, as well as support for up to 8 mono trigger inputs for use with external triggers or drum pads. There are also inputs for hi-hat or expression pedal control and up to two footswitches.