Save 60% on Eventide H910 Harmonizer plug-in

Eventide have announced a limited time special on the new H910 Harmonizer plug-in (AAX/VST/AU) — only $99 until July 31 instead of $249. The plug-in is a faithful recreation of the legendary studio processor that can be heard on countless ground-breaking works by artists including John Lennon, Led Zeppelin, Suzanne Vega, Tom Petty, Laurie Anderson, AC/DC, David Bowie, Van Halen and countless others. And the list of famed producers, audio engineers and musicians that still use it to this day (either in hardware or plug-in form) for its unique combination of pitch shifting, modulation and delay is immense.

The original H910’s analogue sound is unique owing to the fact that it predates the availability of even simple microprocessors or analogue-to-digital converters. The H910 plug-in was painstakingly modeled after every section of the analogue signal chain to recreate the unique sonic characteristics of the original, say its makers. 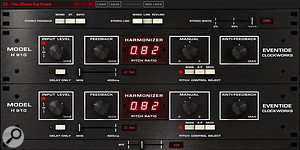 Often used for spreading guitars, fattening snares and applying subtle, organic de-tuning to synths. It’s just as capable for adding harmonies or slapback delays to vocals. If you’re after something more out there, it’s more than possible to generate insane mechanical sounds, drone effects or robot language using self-oscillation, delay and anti-feedback.

This is the first time the H910 plug-in is available unbundled and in every current native plug-in format (AAX/VST/AU). A number of enhancements have been added to this release including “KYBD” and “ENV” pitch control modes, “OUT2 Delay Group” and a mixer.

The recreation of the original piano-style keyboard remote control which was used live by several artists including Elton John, allows you to play musical pitch offsets and blend in a second delay line by using new mixer controls for added stereo sound.

This exclusive version also contains the H910 Dual Harmonizer which recreates the popular technique of running two H910 units in parallel to create lush doubling and other interesting effects such as stereo-widening and cross-feedback.