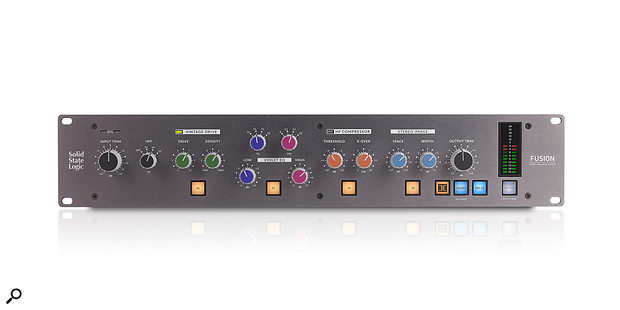 What does the modern producer or mixer need at the end of their mix bus, besides a compressor? Solid State Logic (SSL) think they have the answer in the shape of Fusion, their brand new 2U rackmount analogue processor. Designed specifically with hybrid recording set-ups in mind, Fusion offers five never-before-seen analogue processors chosen for their potential for sonic colouration. Combining that with some clever connectivity and routing, the new device is intended to bring that final polish to your in-the-box mix.

The first of the five new analogue processors is Vintage Drive. Described as a non-linear harmonic enhancement circuit, it’s capable, say SSL, of subtle thickening saturation through to more extreme distortion. Next up is the SSL Violet EQ — more a sweetening equaliser than sonic sculptor, it offers high- and low-shelving bands at four fixed frequency points and promises minimum phase-shift. The High Frequency Compressor is designed to offer tape-like compression for soothing brittle high frequencies. On top of that is a Stereo Image tool which provides a true analogue Mid-Side circuit for widening and spatial manipulation. Finally, there’s the SSL Transformer — another new circuit based on a custom-wound (and custom-designed) which SSL claim will thicken your low end and add sparkle to HF.

Fusion also sports a collection of workflow enhancing features including: +/-12dB Input and Output Trim controls, an Input overload LED, large peak-hold metering and a front-end 18dB/Oct high-pass Filter with three selectable cut off frequencies. A set of XLR connections can be used either as a Stereo Insert for stereo mix bus processing or switched to function as a Mid-Side (MS) circuit enabling separate compressors or EQ to be applied to the middle (centre) and sides of a stereo signal. In Stereo Insert mode the insert point can be switched to pre-Violet EQ, when in MS mode the insert can be switched to pre-Stereo Image controls. Input and Output connections are via XLR.

It will be available worldwide from November but we've got our hands on one already... Look out for the SOS review soon!