Eventide have unveiled the latest algorithm for their award-winning H9 Harmonizer stompbox at the 2016 Summer NAMM show in Nashville.  Sculpt is a multi-band distortion algorithm that provides musicians with a degree of control that would otherwise require 3 or 4 pedals or complex plug-ins. Sculpt is the second overdrive/distortion based effect created for the Eventide H9 platform, following the critically acclaimed CrushStation launched last year. We got a quick demo earlier today, including a look at how the various parameters can be controlled in realtime by using an app on iPad (also available on PC and Mac). 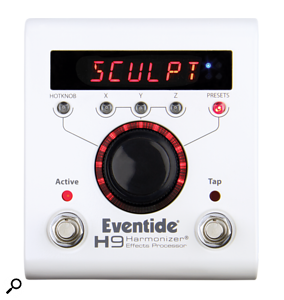 Where CrushStation introduced a new breed of overdrive effect capable of dynamic distortion tones and unique effects, Sculpt gives players precise control over their gain structure. It does this by carving the audio signal into high and low frequency bands and then allowing different levels of gain and filtering for each. This multi-band approach has been used by professionals in the studio and on stage for many years and now Eventide is making it available to anyone with an H9.

Eventide engineer Russell Wedelich shared the thinking behind Sculpt: “While researching analog distortion pedals we realized that, to a large degree, each pedal’s unique character is the result of the particular voicing both before and after the circuit elements that produce the gain. This explains, in part, why there are so many distortion and overdrive effects out there, since each is voiced differently. In our digital playground we can do a lot more, including applying gain control to high and low bands separately as well as providing pre/post filters and compressors that respond to a player's dynamics. We think it sounds great on guitar but we’re also having a blast using it with vocals, bass, keyboards and just about everything else we’ve thrown at it.”