Published 18/7/09
Portable audio recorder
Sony’s PCM D1 and PCM D50 are considered by many to be the best portable audio recorders that money can buy, but they’ve always been priced out of reach of the more budget-conscious punter. The PCM M10, announced at the 2009 Summer NAMM show, costs just $399, and so brings the ruggedness and reliability that Sony are famed for within the grasp of the ‘prosumer’.

It’s a palm-sized device that has a similar feature set to the numerous other portable recorders already on the market. So there’s built-in mics, on-board flash memory, and the facility to record from external line-level devices or microphones. The M10 also has dedicated transport buttons on the front panel, as well as a menu system that can be used to delve deeper into the settings. 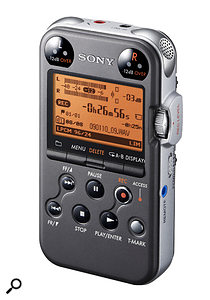 It’s capable of recording 24-bit audio at sample rates up to 96kHz, and it can also record straight to MP3, a feature not found on Sony’s more expensive portable recorders. (The D1 and D50 come with computer software that lets you convert the recorded PCM audio into a variety of formats, including MP3.)

Other features of the M10 include on-board DSP processors that can alter the pitch and speed of audio during playback, so you can slow down a recorded guitar solo to learn how to play it, for example, and there’s a limiter that can be engaged to prevent the input signal from distorting.

Clever recording functions include a five-second buffer, and there’s the option to install a removable flash memory card, which can be used for computer-less backup and for extending the total recording time of the device (a cross-memory feature spreads a long recording over both the on-board memory and the flash card). Computer connection is via USB and it’s powered by conventional AA batteries.

Sony expect that it will be shipping in October.