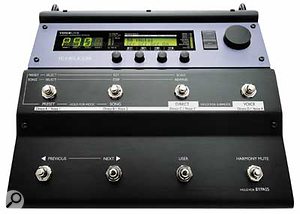 The latest addition to TC-Helicon’s range of vocal processors packages their trademark technology in a brand-new format: a durable floormounting processor designed specifically for live use.
While footswitches have been available for previous TC rack units, the new Voice Live sports two sloping tiers of four switches, allowing greater access to the processor’s functions mid-song, and includes a studio-quality mic preamp and a full complement of EQ, compression, delay and reverb algorithms, as well as TC’s voice-optimised soft limiter (VOS).
The unit also features the acclaimed pitch-correction, harmony-generation (up to four additional parts), vocal-doubling and thickening algorithms from TC’s Voice Works unit, reviewed in SOS June 2003 (www.soundonsound.com/sos/jun03/articles/tcheliconvoiceworks.asp).
At the rear of the unit, there’s an XLR mic input, with a level control and -20dB pad, phantom power and limiter switches, a Mic Thru output to feed a front-of-house mixer, a balanced line in, instrument line in, balanced left and right main outputs, MIDI In, Out and Thru, and an input for an additional expression pedal.
This generous complement of I/O is protected by a pair of carrying handles and the controls on the top of the unit are recessed and reinforced. The base plate is also coated with anti-skid rubber matting, making the Voice Live truly roadworthy. It’s priced at £680 and will be available in May.
Meanwhile, TC Electronic have announced that they will be discontinuing further development of their Spark audio editing software and Native Bundle host-based plug-ins as of their current versions (Spark v2.8.2 and Native Bundle v3.1), apparently in order to allow them to concentrate their attention on the Powercore platform.
The announcement follows the release of the Powercore Firewire and the appearance of new third-party developers (such as Sony and Access) on the Powercore scene, both of which are cited as reasons for the shift, although the fact that the Powercore and its related plug-ins now account for almost 90 percent of the company’s computer recording revenue is perhaps the compelling reason! Nonetheless, it’s tough luck for Spark users, while Native Bundle is being bundled with Cubase SX to form a new package, Cubase XTC, which will be sold by Steinberg.
T TC Electronic UK +44 (0)800 917 8926.
F +44 (0)800 917 6510.
E infouk@tcelectronic.com
W www.tc-helicon.com
W www.tcelectronic.com
Previous storyNext story