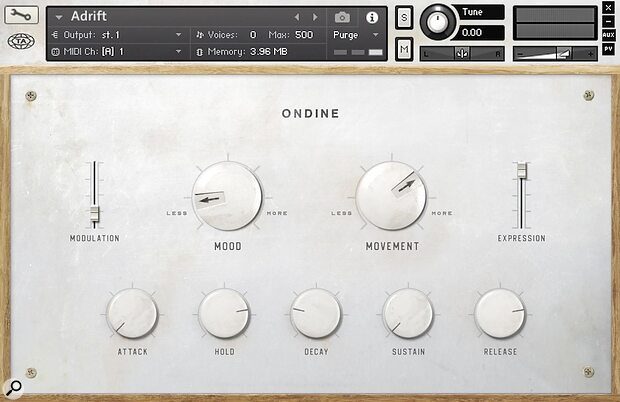 Teletone Audio have recently released Ondine, a Kontakt-based virtual instrument that features samples derived from, and inspired by, some of the world’s most iconic vintage synthesizers. Described as the prequel to their Scarbo instrument, Teletone say that Ondine “explores the lighter, more hypnotic side of the synth spectrum”.

The instrument features a simple interface with just a select few controls available. Two large rotary controls named Mood and Movement sit in the centre of the GUI, with Modulation and Expression sliders placed either side. Modulation offers adjustment of features such as low-pass filters and sine wave patterns, whilst Expression provides an overall volume control for each patch. The function of the Mood control varies with each patch, but is generally mapped to effects parameters, controlling the amount of distortion applied to some patches, whilst affecting the white noise, reverb or delay levels of others. The Movement control’s effect also varies between patches, taking care of everything from subtle variations in pitch to lo-fi tape warble effects and LFO based modulations.

Along the bottom of the GUI, more traditional Attack, Release, Hold, Decay, Sustain and Release controls are on offer, allowing users to shape the envelope of sustained sounds. In some patches, where the velocity of a note will affect an aspect of the sound, the Movement control is replaced by a Sensitivity control. In some patches for example, a note’s velocity will affect its pitch, for these instances the Sensitivity control allows users to fine tune how much the pitch is altered relative to how hard the note is played. Over 50 instruments are included, as well as 25 multi patches, which feature combinations of multiple instruments, resulting in newer and more complex sounds.

The instrument is supported on macOS X 10.10 and above, as well as Windows 7, 8, or 10 (latest Service Pack). Either Kontakt, or the free Kontakt Player versions 5.8.1 or above are required, and there is also NKS support for integration with Native Instruments Komplete Kontrol series controllers.