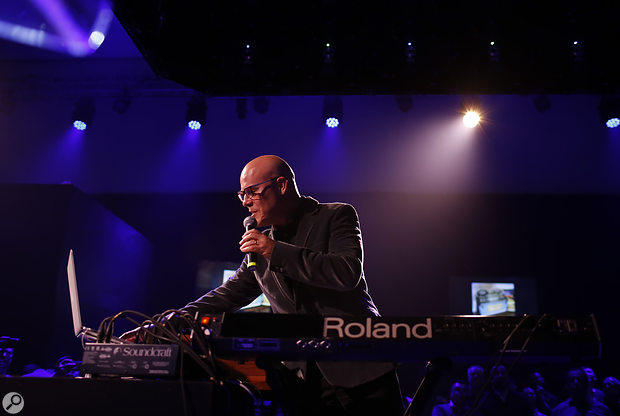 During the 1980s, electronic music innovator Thomas Dolby became renowned for his technical prowess and a new sound that blended his love for technology and passion for music — a sound that launched his career and helped him rise to international fame during the heyday of MTV. Dolby can also lay claim to being a music technology and software maven, a published author and filmmaker, and a Professor of the Arts at Johns Hopkins University.

Featuring just a few keyboards, a drum pad, and a MacBook running synthesizers from Roland Cloud, Dolby’s rig for this live event is simple, but the output will be projected onscreen during the performance to give the audience a unique ‘under-the-hood' perspective.

As part of an enhanced experience, all online audience members will have the opportunity to try the same synthesizers and sounds used by Thomas Dolby in concert by signing up for a 30-day Free Trial to Roland Cloud. This performance is also part of a rare summer tour for Dolby, which starts with a sold-out Hollywood, CA show on July 25 and wraps up in Baltimore, MD, on August 8.

To pre-register for “Thomas Dolby Live in Roland Cloud,” RSVP to the event on Roland’s Facebook page.

What Do Mastering Engineers Actually Do?
2 days 18 hours ago.