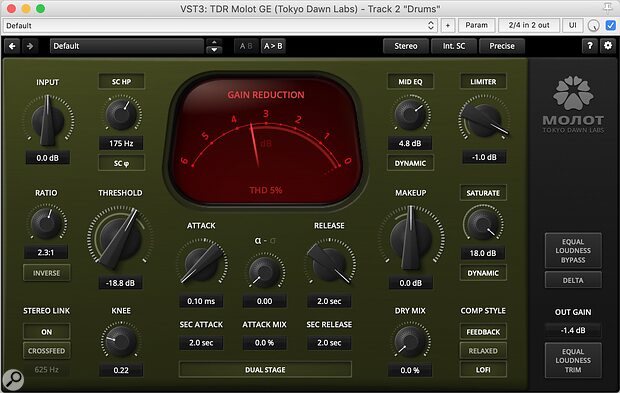 The original Molot, launched by Vladg (Vladislav Goncharov) back in 2011, won many fans — not only because it was free to download and had a cool and quirky GUI, but because it worked well, sounded great, and was supremely tweakable. Vlad has since joined the Tokyo Dawn Labs team and in recent years, alongside various other projects, they’ve been working on a revised version of Molot.

As with most of the other TD Labs plug-ins, there are two versions: the paid (€40) TDR Molot GE, or ‘Gentlemen’s Edition’, and the free TDR Molotok; they both use the same algorithms, but the latter has a reduced feature set. Both are available now and the Mac version is compatible with Silicon.

Like the original version, these new plug-ins adopt an analogue modelling approach, but they don’t model a specific device. The result is a versatile compressor that can mimic the actions of various classic devices or do something altogether different — so in that respect it’s very much true to the spirit of the original. But in the GE version in particular, this overhaul adds an insane amount of extra control and functionality. So much that we can’t really list it here — there’s a very detailed manual on the TDR site if you want to get into the nitty gritty. But, for example, there are dynamic EQ and dynamic saturation sections, and a limiter on board, you have control over the stereo linking and side-chain, as well as an equal-loudness function and the ability to solo the delta signal (the difference between the compressed and uncompressed sound).

We can’t wait to take a closer look! For more information, visit the link below.