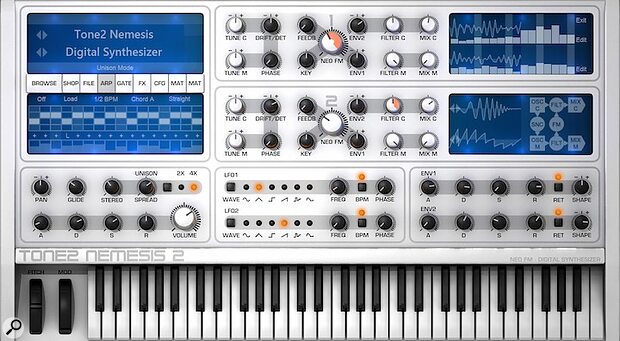 Tone2 Audiosoftware have announced an update to their Nemesis software synthesizer. Version 2.4 is available as a free download to all Nemesis users, and introduces some new features as well as implementing a number of enhancements and bug fixes.

Nemesis is a versatile software synthesizer which offers a range of digital synthesis methods. Waveshaping, FM/phase-modulation, additive, PWM, ring modulation, phase-distortion and more are all on offer, with Tone2 saying the instrument is capable of providing “warm, smooth and creamy tones as well as the classic metallic and cold sounds FM synthesis is known for”. A NeoFM mode, which the manufacturer say is exclusive to Nemesis, combines the advantages of true FM synthesis with conventional phase-modulation FM, offering a greater variety of tonal options.

The instrument is equipped with 48 built-in effects, with flexible routing options providing users with a wealth of options. An powerful and easy to use arpeggiator is included, which also supports some optional advanced features such as auto-chords, polyphonic playback, glides, swing or matrix integration. Dozens of modulation sources are available within Nemesis’ modulation matrix, with almost any parameter able to be controlled up to audio-rate speeds. A MIDI learn feature is also included, with users able to right-click on a parameter to assign it to their controller.

With the introduction of version 2.4, VST3 and standalone versions are now available on the Mac platform, with native M1 processor support in addition to Intel compatibility. The Audio Unit version benefits from a completely new interface, and all versions of the plug-in now have all of their parameters available for automation within DAW software.

There have also been a number of bug fixes, including:

Version 2.4 is available now as a free update to all current Nemesis users. For those new to the instrument, it is currently (8 August 2022) available directly from the Tone2 website for $99€99, reduced from a usual price of $149€149.