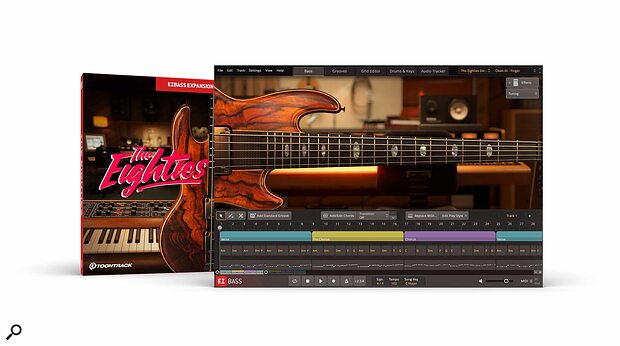 A new expansion for Toontrack EZbass, The Eighties EBX focuses on recreating the quintessential bass sounds of the ‘80s. Coming with not one but two instruments, users can play with an electric or synth bass, with tones inspired by the music of the ‘80s. The expansion also includes a wealth of presets and MIDI tailored for each instrument.

The Eighties EBX includes two multisampled instruments: a Wal Mk1 electric bass guitar and the iconic Minimoog Model D. The bass guitar was captured using both finger and pick articulations, giving users either a traditional warm sound or a more aggressive picked tone. The Minimoog was sampled with the physical controls set to nine different configurations, so chosen to best represent the role it played as bass instrument in the ‘80s. For every setting each of the synth’s three oscillators were sampled individually, which has allowed Toontrack’s sound designers to build complex presets that make the most of the captured samples.

This synth has played an immense role as a bass, which is exactly what we wanted to portray with our take on it. We ended up diving headfirst into the bottomless well of songs it was used in during the era and modeled our sounds after some of the most striking examples,” - Ulf Edlund, EZbass Lead Sound Designer.

Toontrack The Eighties EBX requires 1.4 GB of free disk space and is compatible with EZbass 1.1.5 and above.
It is available for download from the Toontrack website, priced at €80.