Expressive E, the company behind the intriguing Touché controller have published a music video demonstrating the capabilities of their hardware when used with Arturia's flagship synthesizer. All the sounds in the video are made with the MatrixBrute. 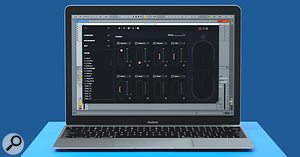 Touché’s built-in MIDI and CV ports let you play with any hardware synthesizer and thanks to the elegant companion software tool, Lié, you easily change the MIDI CCs and CV Voltages of Touché. You can even save different configurations inside Touché’s internal memory, and use Touché directly with your hardware, without any computer.

Expressive E have also designed presets for the Matrixbrute specifically to be used with a Touché. "These presets exploit the unprecedented potential that the collaboration between Touché and MatrixBrute brings, creating a bridge between expressive control and hardware synthesizers." says Roméo Verlat of Expressive E.

We took a look at the Toucheé last year when it was just a prototype, but it's going to be shipping this month according to Expressive E's website for €399.

The Console That Changed Mixing Forever
18 hours 3 min ago.