Published 17/1/05
Surround and 'light' versions added to range
Waves have released version 2 of their acclaimed convolution reverb plug-in, IR1, plus two new variants: IRL, a simpler, less CPU-intensive ‘light’ version, and IR360, which offers reverb convolution in 5.1 surround.
But first things first: IR1 v2 features numerous enhancements and new capabilities. Building on one of the main strengths of the original version, namely the ability to manipulate the impulse responses (or IRs) from which reverb calculations are made, version 2 includes tools which allow the user to capture and edit their own IRs, both from real acoustic spaces and from hardware reverb units.
The new Convolution Start control lets you trim any pre-delay from the beginning of an IR, while the Early Reflections Build-up Control adjusts the attack characteristics of its early reflections. In addition to a traditional wet/dry control, there are now also individual gain controls for the wet and dry signals and the plug-in’s library of IRs has been improved and extended. 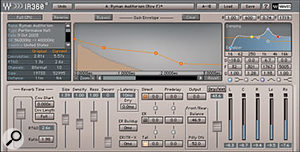 Naturally, all of these new features are shared by IR360 (above). It provides a wide range of processing options, from mono-to-five-channel and stereo-to-five-channel reverb convolution to 5.1-to-5.1 processing (the LFE channel passes through unaltered). It supports sample rates up to 96kHz and, like IR1, features numerous controls, including reverb time, room size, decay envelope, density, resonance, a four-band parametric EQ and a ‘low CPU’ mode.
IRL (below) represents a much simpler (and cheaper) way to access Waves’ convolution reverb processing, with fewer controls and a preset library of IRs. Nevertheless, it supports sample rates up to 96kHz and has reverb time, convolution start point and length controls and a low CPU mode. 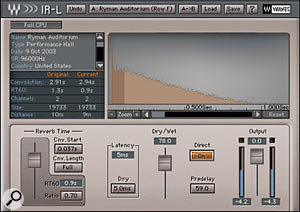