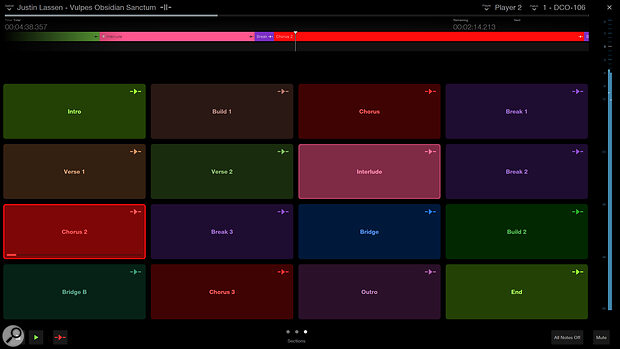 The Show Page now has its own Arranger Track, at the top, which you can use to launch sections of your songs.

We explore the 5.2 update which offers enhancements to the Score Editor, the introduction of live looping to the Arranger Track, and improved tools for remote collaboration.

March 2021 saw the release of a fairly chunky update for Studio One. The highlights include enhancements to the Score Editor, the introduction of live looping to the Arranger Track, and improved tools for remote collaboration. Let’s press pause on the music making and check out what’s new.

We got into the Arranger Track last month so we already know how helpful it is in structuring our music. We created verse and chorus sections, moved them about, opened the Arranger Inspector and reordered our song. One of the things you could do in the Inspector was to move the play head to the beginning of a section by clicking on it. PreSonus have developed this into a bit of a groovy live looper facility, where you can play with new arrangements on the fly, in real time. The difference is that you now have a Sync Mode to dictate the timing of the play head jump in order to keep everything on the beat. Choose from 1, 2 or 4 bars, have it play through to the end of the section, or leave it off if you want instant movement like in the previous version. You can now experiment with different structures without having to create a new arrangement or drag the sections into a Scratch Pad.

All of this Live Arranger business has been punted over to the Show Page and turned into a performance tool, which is where we’ll go next.

We also looked at the new Show Page recently, so we know that this section already had aspects of the Live Arranger, where you could decide what would happen at the end of a song. You could repeat a song or put in a pause (for applause) or carry straight on with the next one. For each song you can have patch changes going on to select the right synth sounds or effects for each of your ‘Players’. If you were clever you might chop up a song into a verse and chorus structure so that you can use these useful loop and patch change options on different parts of a song rather than just the whole thing. Well, PreSonus saw what you were doing and pulled over the structures from the Arranger Track to make this far easier to accomplish.

On our timeline we now have an Arranger Track that Studio One calls ‘Sections’, and this pulls in all the section headings from our song in Studio One. Just as a reminder, when you take a song out of the Song Page (the main Studio One window where you compose and record your music) and into the Show Page, it generates a mixdown and it appears as a stereo audio track. It still does this but takes the Arranger Track with it. We can now double‑click on a section and the play head will leap to it in accordance with the Sync setting. However, we’ve also got the added bonus of being able to set what happens at the end of the section, just like we did with songs. We can make it continue, or loop, or loop and continue, stop or skip, and you can change them, zip about and activate them all on the fly during the gig, as you please.

In Perform mode you even get a big bunch of Section buttons (see screenshot above) to completely control the flow of your song’s structure. You’ll get a similar view in the Remote Software app, so you can rearrange it all from the dance floor if you want. This is approaching the usefulness of Ableton Live. For performers who only launch scenes rather than clips then this totally does that. In theatre or conference situations where you need the flexibility to move a soundtrack forward manually, this could really work too.

Along with the Arranger Track they’ve also brought in the Chord Track, which will make things much easier for your live band members when they’re trying to remember what chord is coming next.

Version 1.6 of the Studio One Remote application for iPad, Android and Windows should give you remote access to the Live Arranger sections, but at the time of writing the Windows version I use hasn’t been updated yet.

Back in the Song Page of Studio One proper, PreSonus have done some work on the selection and integration of keyswitching articulations in sampled instruments. Some sample‑based instruments like Presence have the ability to swap the samples being used for a particular instrument in order to replicate the different ways of playing. It’s very common on virtual string instruments, where you can move from legato to pizzicato, staccato and so on. This is done by pressing a specific key in a lower octave and is called keyswitching. It’s brilliant because it allows you to change the articulation of an instrument using one track and one performance. 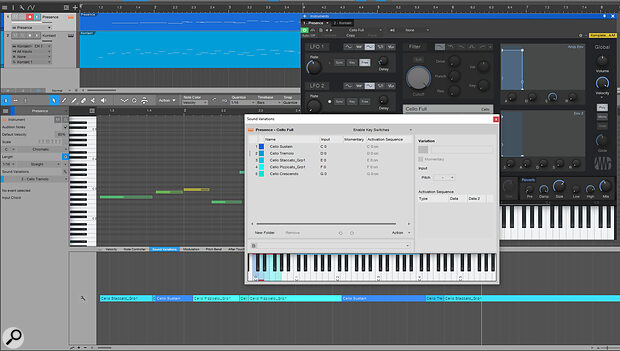 Studio One 5.2 features improved management of keyswitches, which here are called Sound Variations.

A keyswitch lane was introduced to the MIDI Editor in version 5, and you can write these switches in here without having to enter the corresponding MIDI notes into the piano roll or score. Presumably PreSonus decided that using the word ‘keyswitches’ to show keys being used as switches was too confusing, and so now they’re called Sound Variations. The functionality is the same as before, so you can add Sound Variation selections from a drop‑down list in the automation lane and they appear as coloured blocks similar to the Arranger or Chord Tracks.

There’s also an editor that will allow you to map third‑party instrument keyswitches into Sound Variations that can be articulated via the automation lane.

Notation and score writing was introduced, in a basic form, in version 5. Version 5.1 brought us the ability to print, and with 5.2 we now see a couple of other welcome improvements. PreSonus have added some extra staff view options, so you can now see your percussive tracks as a drum score and your plucked instruments as tablature.

The Score Editor can now display your MIDI parts as drum scores or tablature.

For the Drumset staff you can choose from a number of different note head styles, and there are technique options for rolls, chokes, and open and closed hi‑hats. For Tab you can have it on its own or alongside a regular staff. There are presets for a wide range of plucked instruments such as guitar, bass, ukulele, banjo and mandolin, with tunings to match.

The only thing that still disappoints me about the Score view is the inability to add guitar chords, especially as we now have Tab. Considering you have a Chord Track in the arrange window, how easy would it be to slap that across the top of the score for printing?

Workspaces are part of Studio One’s collaboration system. They are an online space where you can upload projects and audio files to share with other people you’re working with. It’s relatively straightforward: all your collaborators need is a free MyPreSonus account, and they can download your audio files and upload their own to your Workspace. Previously you would have to surf to your online account, download the recordings and import them into Studio One. This functionality has now been built into the Browser under the Cloud tab.

Workspaces are part of Studio One’s collaboration system... all your collaborators need is a free MyPreSonus account, and they can download your audio files and upload their own to your Workspace.

To send something to a Workspace all you have to do is drag it to the folder in the Browser. Any uploaded files from collaborators will automatically appear there for dragging into your project. It was not exactly a major problem that needed a solution but this integration makes for a very smooth experience and saves you a bit of time, especially if your collaborators also run Studio One. If not then they’ll just have to download/upload the tracks the old‑fashioned way. 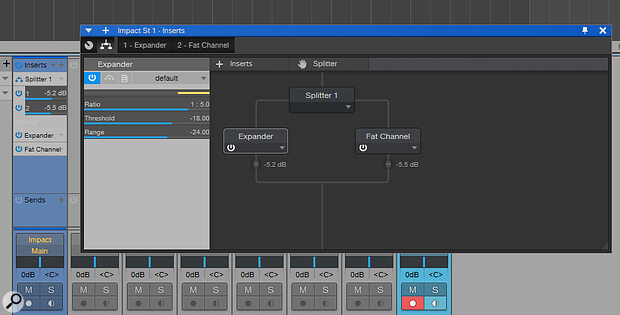 Previously only available in the Channel Editor, the Splitter parallel processing tool is now an independent plug‑in.

What’s cool about this plug‑in version is that it sits there in the Insert list so you can see which channels have it loaded, and it makes it far easier to get to the settings. Just like any other plug‑in, the parameters become available in the insert space so you can very quickly change the split balance and get to the effects held within.

One final feature is a built‑in safety net and recovery system for bad behaviour. If Studio One crashes, you’ll get a ‘Safety’ window come up to apologise and then suggest a few things you could try to do to prevent it happening again. This is usually about plug‑ins, and allows you to restart Studio One without any plug‑ins loaded, which is really helpful when troubleshooting. (It also lets you start normally, because sometimes things just wink out of existence for no reason at all and it’s all fine again the next time you start.) The Safety feature also generates a report that you can optionally send to PreSonus to troubleshoot your problems.