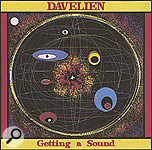 Dominic Brendell (DB): "All of the songs on this demo sound like they are intended to be the score for a computer game, but a Super Nintendo one from about 10 years ago rather than a contemporary one — and the cover looks quite old too. It could, quite possibly, work as a score for a video game, but these days you are getting proper score music written for games."

John Gummery (JG): "I also think it sounds really old, and the sounds he's using are from the early '80s. I can hear Soft Cell influences in there, so I was waiting for a Marc Almond-style vocal to come in at some point. In fact, all the songs sound like backing tracks awaiting a vocal overdub.

"Musically all the tracks are based on the same idea, except they use different sounds to convey the idea. None of the songs progress very much over time, so it's as if they are an intro which goes on for too long. If anything, the third track has a richer texture to it than the first two, but even when it gets going there still isn't enough emotion or soul in the melodies.

"He needs to collaborate with a good singer and somebody with a bit of personality. He could certainly take other people's songs and produce them, because his production is quite good, and he has established a good balance between the sounds."

Phil Legg (PL): "I would compare this to the music from the late '70s rather than the '80s. It is like a Tubeway Army demo. Musically, I found it very uninspiring indeed, like musical wallpaper really, and I am surprised by that because the unusual cover image made me think it would be more individual.

"The other main problem is that it sounds so much like there is supposed to be a vocal on it that it doesn't even function properly as instrumental music. So he definitely needs a collaboration with a songwriter and lyricist to get this going." 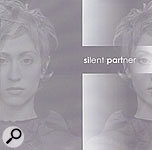 PL: "The singer and producer partnership of this act form the nucleus of a band, so you can see them touring, making records and getting stuff into the charts. It's a practical situation in that regard. They seem to have their image together — as is demonstrated by the nice story about how they met in a London street.

"The vocals are hideously quiet in the first track, which is a shame. The vocal level improves in tracks two and three, and sounds far more open. I also like the squashed toughness of track three.

"One tip here is that if you push a vocal up on a track when you are mixing, it doesn't necessarily mask the rest of the track; what happens is that everything else in the mix becomes clearer. I have experimented with this when I have had musicians saying 'I can't hear the such and such'. That has happened when there have been two things fighting in the mix, and ironically, I found that if I pulled down the very thing the musician was struggling to hear, so that it wasn't fighting with the other part, they would say 'That's better.' I wasn't trying to trick them, it's just that perception is such a big part of how we identify a problem. So if Silent Partner can make the vocal louder in the first track it will open the sound out a lot.

"They have used loads of samples on tracks one and four, as listed in their letter, but they have got to stop doing that because they will get nowhere. Sending these sample-heavy tracks to a record company will put them off because it is too impractical for record companies to clear all those samples, and, by the way, I can't hear any of those records on this demo even though there are are about six samples on the last track. There's even supposed to be Tubular Bells in there somewhere, but where?

"Unfortunately, they are almost using the fact that they've used these samples as though it is a selling point, so they need to learn more about the business. They don't need to use those samples, and I personally think the middle two songs, which don't have any copyright samples, are the best. Having said that, it's all pretty good. It just needs an A&R man who basically believes in it enough to pick it up and run with it."

JG: "I noticed that the third track, which had no samples on it at all, was the best. They sound like a really good songwriting and production team, they're producing a finished product, and their songs have a variety of different characters and moods.

"I really like the production details they have included on their letter, I found it interesting to learn about how they made a particular sound. None of the other demos we've had here did that, and it is more interesting than reading a list of studio kit."

DB: "I thought all the tracks were really good too, although I prefer elements within each song rather than the songs themselves. I really like the drums in the first track. In the second, there is a great tremolo effect on her voice, and I really like the song aspect of track three. Track four has a very nice bass line.

"I've noticed from a lot of the electronic tracks we've heard today that people always seem to get bass lines wrong by throwing in a big bass sound and then hoping it works. Silent Partner have used a really good rolling part — almost a Chemical Brothers bass line. So, although I don't think the songs are quite right, they have a lot of good ideas to work with." 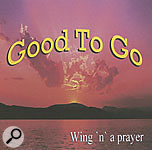 JG: "This track uses verse, middle eight and chorus to form a classic song structure, so it isn't arranged to work as instrumental music, but, at the same time, there are no vocals."

PL: "So much of the stuff we've heard seems to be in need of a collaboration with a singer, and this is no exception. It's pretty good but what can you do with it? He doesn't say what he wants to do with it, but the title 'Good To Go', and the band name Wing 'N' A Prayer, suggests that it is going to be rock music like Bon Jovi, but, in actual fact, it sounds like a pop arrangement for a TV programme.

"If his intention is to get into TV music he needs to do some legwork and visit some TV companies, just as a band would go to record companies."

DB: "All the TV companies are networked and they've got libraries of this sort of thing so he just needs to send his work out there.

"We keep coming back to this thing about how people should collaborate, but now people can make all the sounds they want using computers, they are not actually working with anyone, so although this is a polished track, there are no other elements involved. When there is a band, at least there are four people working on one song."

JC: "I agree that although this sounds polished sonically, the input of other musicians is quite possibly what it is lacking. In the old days you had to work with at least a drummer, bassist, guitarist and vocalist, before you could get anything to sound good, but this guy doesn't have to work with anybody to put this sort of material together."

PL: "Up until about 1990, an artist would be signed on the basis of a demo which was made on a grungy cassette, but today, thanks to the low-noise qualities of the digital format, you can use what you did on the demo for the record, so a poor demo can go all the way up the chain."

JG: "I can hear the influence of Annie Lennox in these tracks. I like her voice but I think the harmony vocals need a bit more aggression, and a bit more soul. Her voice is very filtered, sweet and sugary but on an Annie Lennox track for example, the softer vocal parts are often set against a soulful ad lib, or contrasting backing. Having said that, I can imagine this sort of thing being played on BBC Radio Two because Dido has made a career based on gentle tracks that don't go very far.

"I quite like the first two tracks and her voice is nice to listen to, but she needs a chorus hook that sticks in your head, and the problem is that there are no killer hooks in the chorusses."

PL: "I thought the first track was the best, but after the third track, which is called 'No Ordinary Other Day', it all seemed to be on one level.

"She drones on through the verse and then gets to the line 'I might be wrong, but I know I've tried,' which makes quite a nice vocal hook at the end of the first chorus, but if there was more of a dynamic vocal arrangement, more sensitive backing parts or a stronger performance it would have brought out that vocal hook even more. So I think she needs help with the vocal presentation.

"You can hear that the production has been done by someone with a lot of experience, because it is the best thing about it. But she may need inspiration from someone who is more sensitive to the vocal arrangement and understands what can be done with a monotone voice. I agree that Annie Lennox is a good example.

"The one other thing I would say is that the name Louise Eggerton doesn't quite fit the marketplace, it's a bit Reginald Dwight!"

John Gummery is the course leader for the BA in Music Technology at Thames Valley University in Ealing, West London. His teaching and research interests cover digital broadcasting and surround sound recording and mixing. As a bassist he played with several bands in the 1980s before going on to serve as a recording engineer in numerous London studios. He also ran his own studio in Clapham called The Music Womb for three years. John also work on his own compositions and production work.

Phil Legg comes from a music production background and has credits including many UK soul artists such as Terence Trent D'Arby, The Pasadenas, Des'ree and Beverley Knight. His remix credits include De La Soul, Lisa Stansfield and Eternal. Phil has recenty set up a new urban soul record label and publishing company called Futureproof. News of their latest releases can be found at www.futureproofrecords.com

Dominic Brendell graduated from Buckinghamshire Chilterns University College (BCUC) with an MA in Music Industry Management. His current position is Artist & Repertoire Manager for the Futureproof Records label. Dominic also manages a rap act called Red Jackz and is always on the lookout for new talent. Sound On Sound readers can contact him at: dominic@futureproofrecords.com