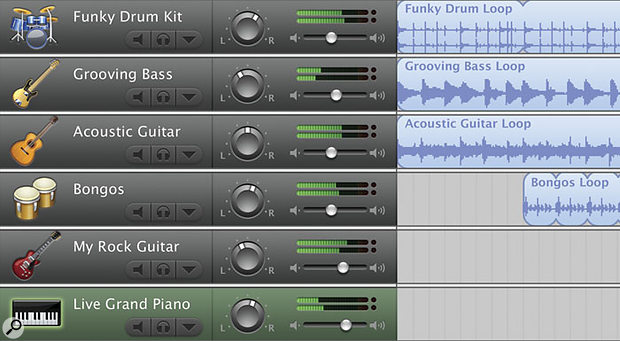 Garage Band — for some readers, it's good enough to rival Logic.

Garage Band Has A Fan

After reading Mark Wherry's Apple Notes column about Apple's iLife software in April's SOS, I was compelled to put pen to paper. A fortnight ago I was lucky enough to take delivery of a 12-inch G4 Powerbook to replace my ageing G3 — until then I hadn't considered upgrading my copy of Logic.

After learning what the Logic upgrade would cost me, I was disgruntled to say the least. However, as I spend more time with the new Powerbook, I am becoming less and less concerned about upgrading. This is purely down to Garage Band. For experienced Logic users, Garage Band is a breeze, as it has adopted all of Logic 's GUI conventions — it 'feels' like Logic. Within an hour, I was completely at home running my collection of Audio Units synths and effects — I didn't need to refer to the help pages once.

Additionally, as a Final Cut Pro 4 user, if I really feel the need, I can bounce individual tracks out of Garage Band and apply further Emagic effects in Soundtrack [Apple's audio-for-video application, included with Final Cut Pro 4 — Ed].

Whilst I realise that some musicians will consider the Garage Band feature-set to be too restrictive, I think it's more than capable of cutting it in a professional situation.

And the best bit... it's totally free [with the latest Macs, that is — Ed]. Who needs Logic any more? Not me!

In response to Chris Marsh's letter in SOS May 2004, it is disappointing to hear yet another horror story of budget recording sessions gone badly wrong. From working day in, day out with musicians, writers and producers both amateur and professional over 17 years I can truly empathise with how soul-destroying a botched session can be for both artist and engineer.

But to suggest that professionals are not keen to complete their work to the highest standards possible, being interested only in separating their clients from their money, is idiotic, antagonistic and wrong. My initial suggestion to Chris is to look in his record collection, check the credits of his favourite 50 recordings and see how many of them were executed in professional studios, by dedicated (and evidently talented) people exchanging their time and skills for a living. The evidence will speak for itself.

As for aligning the craft of the professional engineer with that of the witch doctor — their only power coming from the ignorance of those they rule — I'm afraid this simply doesn't wash. Anyone who cannot provide consistently reliable results will not last in a position of responsibility, and none more so than the engineer whose gaffes are recorded on tape as permanent evidence for all to hear. Also, as is borne out by the vast majority of the interviews in SOS, a good engineer is never afraid of passing his/her knowledge on to the 'ignorant'. Why?

Well, contrary to what Chris thinks, recording is a black art, so much so that a technique that achieves the magic you and I aspire to capture is not replicable with the next artist, the next studio, the next piece of equipment or even the next day. Greatness is achieved from the chemistry between those present, the place and the moment. It comes when you aren't expecting it and it largely eludes you when you are. And it rarely comes to those who have not put in the blood, sweat and tears it takes to make themselves bloody good at their craft, and, in this field, that means professionals.

Unfortunately Chris, if you did not employ a producer, you only have yourself to blame for your woes. In the sub £500-per-day range, it's a minefield, but at the end of the day you were the one who chose to use the studios you did. And without that producer, you alone are responsible for directing your engineer.

It sounds like your big mistake was not asking to hear records the engineer/studio had made, not checking references from their previous clients, not spending enough time establishing the ability of those involved to fulfil your remit within your means, nor having the nous, experience and commitment to shop around until you found a suitable place.

Whilst I can sympathise, don't use your obviously limited experiences as the basis upon which to denigrate my profession.

The Price Is Right!

Simon Price is bang-on with his views on GUI design [Sounding Off, SOS May 2004]. As someone who started MIDI sequencing with Cubase Score on a Macintosh LCIII, I have watched as the studio has slowly transformed from the actual to the virtual.

About two years ago, I was messing around with Cubase VST when I realised that I hadn't been able to finish a tune in over a year. Worse than that, I was suffering from repetitive strain injury and was beginning to lose my eyesight!

The tactile studio space that had once surrounded me had receded all the way into a small square (the monitor) in front of me. And it was a total mess, with each window partially overlapping the next, like a pile of lecture notes in a student flat.

All this jerking around with the mouse in order to locate windows and make small knob adjustments had allowed RSI to set in, and, on top of this, I'd got into the habit of squinting into a fixed distance and hardly ever blinked. This was straining my eyes and causing them to dry out. I was temporarily banned from mouse and CPU work by my specialist, ultimately leading to the loss of my day job as a sound designer.

Then one day I was introduced to an early version of Ableton Live, which a colleague of mine (Stefan Robbers) was beta-testing at the time. I thought the context-senstitive interface was amazing. Clear mixer and arrange views, no cluttered menus, simple graphics and no damn pop-up windows (unless you want to use a VST plug-in's GUI). And the price was good too! To date, the only other software interface that has impressed me like this has been that of Mackie's Tracktion.

I now work with a 17-inch Powerbook and an additional monitor, leaving me free space for the odd Reason sequence or Spark session running alongside Live. Any hardware synths get sequenced using a Yamaha RS7000 and are recorded into Live. The only other outboard gear I have now is a MOTU 828 interface, a TC Triple C processor and a Mackie 1402VLZ mixer for monitoring. This simple little setup is portable, and has allowed me to do the best work I have ever done. Also, I no longer suffer from double vision or arm and shoulder pain, because this setup has broken those bad habits.

When I think about Simon's examples of bad GUI designs, I not only agree, I shudder. Long live Ableton, and all those who follow.