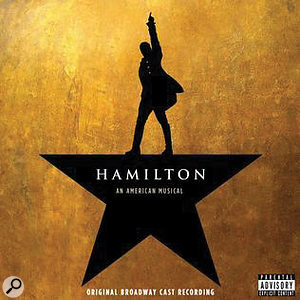 One of the things I love about musical cast recordings is that they’ve remained more or less a bastion of wide dynamic range in the face of the wider music industry’s loudness war. And it stands to reason, partly because a musical has to create momentum over a much longer duration, so needs a wider expressive range to work with. But I’m guessing that the audience for stage musicals also tend to listen less casually by nature, because they’re captivated by the long-term narrative arc, so there’s less need for loudness as a competitive feature — listeners are, I’d imagine, more likely to skip between their favourite tracks within the Hamilton album than they are to shuffle a playlist lining up those against regular chart tracks.

The song ‘Wait For It’ is apparently a favourite of the show’s writer and lead performer Lin-Manuel Miranda, so it’s as good a place as any to hear the benefits of this dynamic range. When the drums first pound their way in at 1:31, for instance, the sheer level and sense of punch delivers a genuine element of surprise. It’s also great that the lead vocal isn’t overly upfront at that point, which could easily have undermined the rhythm section’s illusion of power. And check out the level drop-down for “Hamilton doesn’t hesitate” at 2:16. Again, this is something that’s as rare as hens’ teeth in chart singles, but without it the build-up from 2:28 towards the eventual full-texture entry at 2:38 simply wouldn’t generate the same sense of propulsion and impact.

The other thing that really caught my ear on the Hamilton album is the cast’s ensemble choir sound. As mix engineer Tim Latham commented in our Inside Track feature back in SOS September 2016, squeezing more than two dozen individually close-miked vocalists into a full band mix takes some doing, so it’s particularly impressive how smooth the end result remains, even as the performance energy level rises — as in ‘Wait For It’ from 1:30 onwards. In my experience, there’s a real danger of harsh presence-frequency build-up when layering so many high-intensity vocals together. Some of the secret sauce in this recipe is that the backing arrangement derives much of its apparent brightness from the snare (rather than from cymbals, keys, or strings), and there’s so much space between hits that the vocals don’t need buckets of pop-tastic upper-spectrum emphasis for balance cut-though or lyric intelligibility. The call-and-response vocal arrangement doesn’t hurt either, because the ensemble vocals seldom have to compete directly with the brighter lead timbre. Those things aside, I think Latham deserves a great deal of credit for making such sonic profit from the arrangement, because the modern choral sound he’s fashioned is, to my ears, a benchmark of excellence. Mike Senior 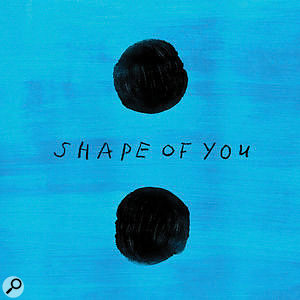 I have the greatest respect for Ed Sheeran as a songwriter and performer, and have commented favourably on a couple of his singles before (in SOS April 2013 and May 2015). However, I can’t help feeling that the enormous commercial success of his recent pair of post-hiatus singles has more to do with sheer “Wow, Ed Sheeran’s back!” effect than the actual qualities of the music itself. The strange harmonic meanderings and over-saturated chorus texture of ‘Castle On The Hill’ leaves me completely cold, while ‘Shape Of You’ feels more like video-scaffolding than it does something designed to sustain a listener’s interest musically in its own right.

Always on the lookout for a silver lining, though, I can muster some admiration for a couple of elements of the latter song’s sound design. The rhythmic acoustic-guitar percussion filigree first heard at 0:05 is a great effect, and nicely judged in terms of creating a fluid groove. (That this gives the nod to the guitar-troubadour facet of Sheeran’s musical persona can’t be bad for brand recognition, either.) And the other moment I rather like is where that extra little guitar part enters the fray at 2:10, serving to differentiate the second chorus from the first. What I find slightly unusual about this added layer is that it’s resolutely mono, whereas it’s much more common, in my experience, for such second-time-around section embellishments to make their presence felt by extending the stereo field and/or depth perspective. Here, however, the part sets itself in relief by contrasting its more sustained nature with the fragmentary phrasing and staccato delivery of the other arrangement elements, as well as by its gently phased timbre. Mike Senior 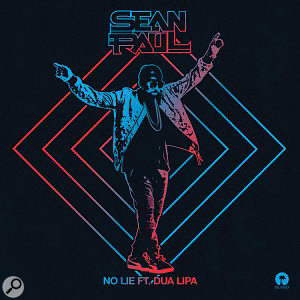 Between them, these two mixes rather neatly demonstrate the low-end limitations of many project-studio monitoring systems, so would be worth careful auditioning in your own studio if you’re wondering whether your setup’s ready for the demands of mixing mainstream club-oriented music.

The first problem with many affordable nearfield-based listening systems is that, despite frequently being tuned to deliver bags of impressive-sounding 50-100 Hz energy, they don’t actually shed much light at all on the bottom octave of the audible spectrum. As such, the deep sub-40Hz tones which underpin the first verse of ‘You Don’t Know Me’ (0:15) will usually fall off the radar in small studios, and the duration of Sean Paul’s descending sub-bass drop at 2:42 will be underestimated. 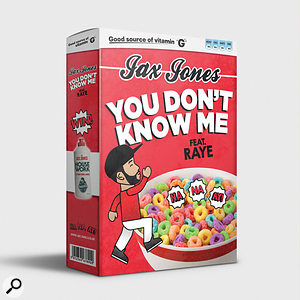 However, even where the low-end reach is adequate, low-frequency system resonances all too often cloud mixing judgements at that spectral extreme. For example, in most of the small-studio rooms I’ve encountered, you’d struggle to differentiate the extremely tight and controlled sub-bass pulse of Sean Paul’s kick drum (first heard at 0:11) from the more relaxed LF envelope of Jax Jones’s aforemented sub-bass verse tones, because the speaker and/or the room are causing low frequencies to ring on substantially in the time domain. Furthermore, if low-frequency monitoring-system resonances are severe enough, it actually becomes tricky to distinguish properly between closely placed low-end contributions of kick and bass events, as for example when the main bass foundation arrives in the chorus of ‘No Lie’ at 0:49. If you’re not hearing a clear low-frequency kick-drum pulse distinct from Sean Paul’s sustained bass line in that instance, then unfortunately your mix-referencing process is likely to involve an undesirable and unsettling degree of guesswork. Mike Senior 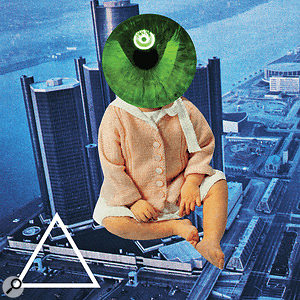 Well who’d have thought it? An EDM track as Christmas number one! I, for one, haven’t been as pleased since Rage Against The Machine pipped Joe McElderry to the post back in 2009.

The lyric’s themes of single motherhood have already spawned plenty of column inches, but it’s actually the mix’s low-frequency spectrum that interests me most from a production perspective. What’s unusual is that the final chorus section (3:20-3:57) is significantly less powerful at the low end than the full-beat verse/pre-chorus texture first heard at 0:37. Normally this wouldn’t be a very promising recipe for any chart mix’s long-term dynamics, given the danger that the verses might make the choruses sound puny by comparison. In the event, however, Clean Bandit actually turn this potential weakness rather cleverly to their advantage.

Their main strategy for neutralising the long-term dynamics risk is simply to avoid directly following the verse beat with the chorus beat. So, for example, they make an arrangement feature of dropping out the beat for the first section of choruses one and two (the bits with Anne-Marie’s full “rockabye baby, I’m gonna rock you...” lyrics), so that its return can still make an impact under the second section’s triggered lead-vocal sample and Sean Paul’s “rocka-rocka-rockbye” riffing. For the final chorus, on the other hand, where it makes more sense for the main beat to arrive at the outset, they use the middle section’s dramatic breakdown (culminating in the slow-down and pause from 2:58) as a way to link into a beat-less pre-chorus. Again, the unwelcome possibility of a small-sounding chorus beat is averted.

Once those long-term dynamics challenges have been surmounted, the low-end mismatch begins to work in Clean Bandit’s favour, in a couple of different ways. Firstly, it gives the start of Sean Paul’s rap section at 1:24 a vital bit of extra oomph, so that it doesn’t sound like a let-down after the frankly more musically interesting chorus section preceding it. And, secondly, the more lightweight chorus bass synth can render its fast A-B-C-B-A-G-F hook (first heard at 1:15) with better definition — had that bass line been overloaded with low end, it’d likely have muddled the kick drum’s important low-frequency pulse at that point. Mike Senior 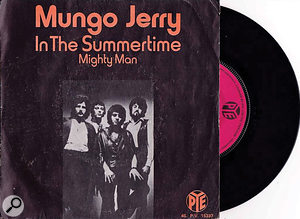 Maybe it’s because I was raised on a diet of Benny Hill and the Two Ronnies, but I just love that one of the top five best-selling singles of all time features prominent farting noises in pretty much every bar! Since this simulated flatulence is panned hard left, the easily offended might perhaps save their blushes by listening just to the right-hand stereo channel, although owing to the mix’s unusual vocal panning (the lead and its sporadic double-track are on opposite sides of the panorama) these delicate flowers will also miss out on half the lyrics. Mind you, perhaps that’s for the best, given the “have a drink, have a drive” lead lyric that so memorably underscored those early ’90s UK public information films...

But there are plenty of other interesting things about this whimsical production besides, not least how little of it there actually is: the last minute and a half is just a straight copy-paste edit of the opening. That said, if you actually line up the waveforms of the two sections, you’ll discover that the latter is, in fact, a polarity-inverted version of the former. To me this suggests that the edit wasn’t conceived during the initial mixing process, but was carried out as part of a later editing stage, with the polarity reversal creeping in while the opening section was copied to a new bit of tape.

Of course, the other thing that arrived during that edit was the stereo ‘car driving from right to left’ sound effect. Although you might initially think the stereo movement derives from some engineer twiddling a pan control, if you listen carefully you’ll notice it’s actually a proper stereo recording (probably captured via some kind of crossed-pair microphone technique, given the level-difference-based imaging precision). On this evidence, and given that LCR panning seems to permeate the whole record, I’d hazard a guess that the Pye Studios desk this song was mixed on didn’t have the fully variable pan pots we now all take for granted, but only simple three-position panning switches. Mike Senior