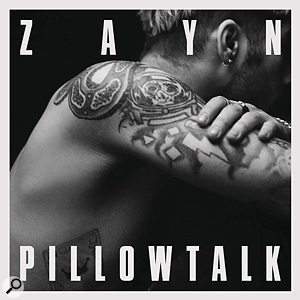 In past columns I’ve made disparaging use of the term ‘consonant sludge’ to describe a phenomenon that crops up periodically in bombastic chart-pop choruses, where so many harmonic instruments are layered on top of each other in pursuit of an epic ensemble sound that it’s all but impossible to hear any of them distinctly in the final mix — you just end up with a kind of amorphous chordal pad surrounding the drums and vocals. What I find quite refreshing about ‘Pillowtalk’, though, is how it turns this idea on its head, in a sense.

What I mean is that there are plenty of chordal elements here that seem almost purposefully bland and pad-like (in particular the static power-chord-style block harmonies of the chorus), but then the interest is maintained by swarms of fleeting sound-design elements that dart in and out of view from the cover of this wash, frequently hovering on the boundaries of identification. Are those vocals bubbling up in the background before the first chorus (0:46-0:53)? Where do the vocal echoes of “climb on board” (0:15) end and the electronic blips begin? Is that an electric guitar or a synth at 2:40? So where a traditional consonant sludge takes lots of distinct instruments and swills them into an indeterminate mush, ‘Pillowtalk’ starts with something bland, and then seems to extract distinct instruments out of it, so to speak.

Furthermore, while the resulting soundscape performs many of the same functions as the traditional sludge by maintaining an enveloping texture and hinting at both epic space and innumerable instruments, at the same time it draws out masses of sonic detail to entertain and intrigue the repeat listener in equal measure. Such production refinements lend proceedings a definite air of artistic maturity here, in my opinion, and can hardly have harmed Mr Malik’s campaign to draw a firm line under his boyband past. Mike Senior 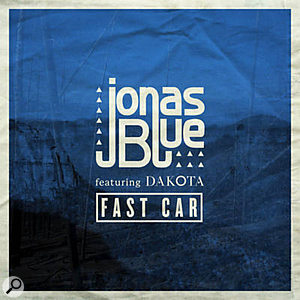 What if you want the sound of vocal double-tracking in your mix, but the singer’s only recorded the line once? Well, one time-honoured approach is to use modulation treatments such as single-tap chorus (ie. a super-short delay line with a modulated delay time) or vibrato to create a clone of the recorded vocal with minute pitch/timing variations — akin to those you’d encounter in a real double-track. The challenge is differentiating the clone sufficiently to create a passable illusion of a second performer (rather than just a hideous plastic chorusing effect), but without making the timing/tuning of the whole confection seem sloppy. Another tactic that’s gained currency more recently is to process the vocal clone with repitching software such as Auto-Tune or Melodyne to give it a different pitch-profile. Although this avoids compromising the overall tuning or timing, the danger is that you end up with rather a phasey sound when the clone combines with the original, because the two parts remain too similar. In practice, a combination of these two basic techniques (whether applied from first principles or via a dedicated ‘vocal doubler’ plug-in) is sensible, in my view, with the modulation treatments introducing variation, and the pitch-processing keeping the tuning fluctuations within the bounds of taste.

Which brings me to the vocal sound in this recent Tracey Chapman cover. On first impressions it has the flavour of double-tracking, but the match between the two parts is so tight that I suspect it’s a clever emulation. It’s a tricky one to call, admittedly, because super-tight audio editing of real double-tracks might also have generated such precise synchronisation. On balance, however, a couple of bits of evidence swing the argument in favour of the artificial explanation for me. Firstly, compare the right and left channels of the mix on the word “car” at 2:09. While the right-hand layer sounds fairly natural, the left-hand one exhibits weird artifacts that I strongly associate with artificial pitch-modulation. And, secondly, consider the subtle octave doubling that’s lurking in the shadow of the main vocal line most of the time. (If you’re having trouble hearing it, check out “Momma went off and left him” at 1:59, where it’s particularly audible.) Such a synthetic sound must surely derive from pitch-shifting technology, and if pitch-shifting was used there, then I reckon it’s odds on that the double-track was generated in a similar manner. Mike Senior 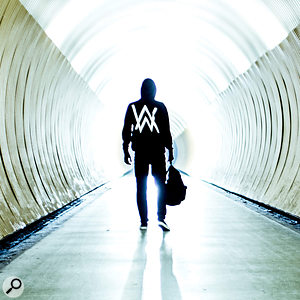 This nicely stripped-back example of the Euro-EDM mix-pumping cliché makes a clear distinction between the textural elements of the backing track (ie. the bass, synths, and sound effects), which all duck heavily in response to the kick-drum, and the vocals, which don’t. Clearly this wouldn’t be possible if the pumping effect were being created with a simple master-bus process, so if you’re trying to emulate this kind of sound then you need to find a way to implement the pumping on a track-by-track, or at least bus-by-bus, basis. Furthermore, we’re also treated to the hoary old trick of pumping triggered in the absence of the kick drum, for example on the bass line during build up to the first chorus (0:42-0:54) and on the whole backing mix at 1:15 and 2:52.

Fortunately, there are now myriad ways of implementing a sufficiently controllable pumping scheme in modern DAWs — my favourite being to use duckers on the appropriate channels, and then feed their side-chains from a dedicated trigger track (usually an edited copy of the kick-drum audio) which doesn’t itself feed the mix. What I would advise against, though, is using MIDI controllers and/or track automation curves for pumping purposes, because it’s trickier to make per-channel adjustments to the ducking characteristics that way, or indeed to quickly experiment with different instances of kickless modulation. Mike Senior 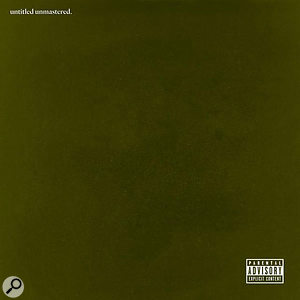 There are so many ideas bursting out of Lamar’s recently released demo compilation, Untitled Unmastered, that it’s hard to know where to start when it comes to writing about it! For my part, the track ‘Untitled 02’ is probably the highlight, if only for the rapper’s tremendously inventive use of vocal deliveries and textures: the full-bodied “get God on the phone” at 0:39 versus the following verse’s pinched breathiness and quasi-yodelled phrase endings; the chorusey falling group interjections which begin at 1:14; the strangely robotic triplet-based riff at “pimping and posing”; the emphatic vibrato in the backing-vocal “ah” at 1:40; the laid-back patter of that extended third verse from 2:30; and the strung-out higher-register from “what if I certified” at 3:33. There are plenty of rappers who struggle to match that expressive range on a whole album, let alone one demo!

I’m also a sucker for this mix’s method of generating an exaggerated depth illusion, where a massive distance is implied between the up-front elements (the point-source lead rap, super-dry, short-release kick, and wide stereo percussion) and background textures which seem to be made up primarily of a piano’s recirculating reverb.

Those good things notwithstanding, I can’t help feeling that this album’s title is missing a word: uncredited. There’s a limit to how seriously I can take biting social and political commentary from someone who releases an album full of collaborations with a slew of talented fellow musicians, engineers, and producers, but who steals their credit by putting nobody’s name on the CD but his own. What’s worse is that if the sense of mystique in this specific instance actually drives greater recognition to these people than might otherwise have been the case, it’ll provide lazy/unscrupulous artists of the future a golden opportunity to weasel out of their own moral responsibilities by arguing that it’s actually better press to leave the credits off. Oh yeah? In which case, leave the bloody artist’s name off too! Mike Senior 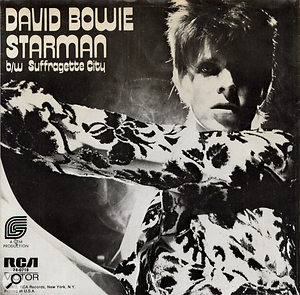 As befits a song with the line “hazy cosmic jive” in it, this production is replete with sonic oddities. To be fair, the super-damped, close-miked drums and wafer-thin cymbals were fairly commonplace in productions of the era, but I’ve always found such wide tom panning a strange listen, especially from an audience perspective, as it is here, with the low tom hard left — after all, the only person who normally appreciates that kind of panning width on drums is the drummer, not the audience. And take another listen to the acoustic guitar in the right-hand channel during the introduction. That’s a load of pick noise in there! But of course it’s an indication of the production acumen at work here that such individualistic sounds slot together in the way they do. So, for example, with the cymbals so low in the balance, the pick noise from the two guitars ends up filling that arrangement role in a manner akin to stereo percussion; and the claustrophobic closeness of the miking on both the drums and the acoustic guitars maximises the arrangement contrast when the more expansive string and electric-guitar sounds enter later in the song.

In addition, though, there are a couple of fun little technical details to be discovered. The first is just before the first drum fill at 0:19, where the left-hand side of the stereo image seems to dry up about a second before the first drum hit. I wonder whether, in the absence of a right-channel guitar double-track during the introduction, the mix engineer (the legendary Ken Scott in this case) decided to even up the stereo balance by manually fading up the left-hand channel of the plate reverb before the start of the track, and what we’re hearing is him fading it back down to a more appropriate mix level a little too early before the drum fill. Whether by luck or design, though, I rather like the way this creates a sense of momentary vacuum in the texture, as if the production is holding its breath briefly in anticipation of the drums’ arrival.

The second thing that piqued my interest was that Ken Scott has mentioned in interview that he only remembers mixing one version of this song, but there are two different versions available: an album version and a single version, the latter featuring a much higher level of the phased piano/guitar pre-chorus fills at 0:51 and 2:10. To investigate, I loaded the 2012 remasters of both versions into my DAW, matching both the playback speed and polarity (inexplicably inverted in the single version) and, judging by the nature of the phasing artifacts between them, I suspect that both are in fact the same mix, except that the single version has had both those aforementioned two-bar sections spliced into it from a different mix. Indeed, if you examine the waveforms at the starts of both those choruses, it appears that an orphaned fragment of extra transient has been spliced in from the alternate mix just before the downbeat, and in the second case you can clearly hear its little ‘pop’ in the left-hand channel (at 2:15). Moreover, while I had the editing scissors out, I discovered that the first and second two-bar fills phase against each other if you line them up, whether you try it with the album or single versions — in other words, it appears that the second fill is a copy of the first in both mixes. Mike Senior