‘Freak Of The Week’

Crucial to the appeal of this production is its sparseness, which focuses maximum attention on the vocal performances. This is always a high-risk strategy because it puts the onus on everyone involved to make the most of each vocal part, but it’s carried off with confidence here. One of the secrets to this success is that each vocal part has such a distinct and identifiable character. Contrast, for instance, the mid-rich monotone of the main hook with the rather scooped timbre of the first rap at 0:30. Not only is there the spectral difference, but the rap kicks off with a much more understated and intimate delivery that gives the voice a whole different flavour. The second rap has more aggressive projection, a narrower, more presence-boosted mix presentation, and none of the first verse’s subtle double-track stresses. And finally the “she’s so freaky” backing vocals introduce a new breathy delivery and overtly layered production sound. I can’t tell you how many project-studio hip-hop productions I hear that (whether intentionally or not) have no more variety in their backing arrangement than this, but then fail to do the necessary work to sustain the interest vocally. 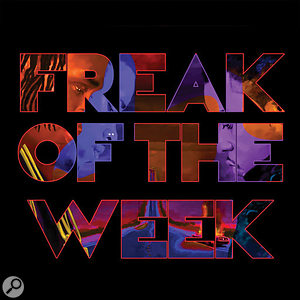 The other thing that catches my ear here is the beat programming. Although the restricted number of rhythmic elements gives the impression of extreme simplicity, they are deftly deployed in different combinations to provide variety from section to section. Take the “freak of the week” hook, for instance: at the outset it appears without any beat at all; by 0:25 the snare has joined in; at 1:11 and 2:11 the snare is replaced by the off-beat “hey” group shout; and then both appear for the final statement at 2:52. I also particularly like the way the beat is bereft of any upper percussion most of the time, allowing lots of vocal detail to shine through the mix. Even when the great little stuttering hi-hat part arrives at 1:01, it has such a wonderfully soft, understated timbre (which sounds like it’s been flanged or something), that it doesn’t in any way distract from the lead part — and its disappearance, along with the kick, four bars later neatly highlights the onset of the hook. Mike Senior

“Can you play that sax?”, asks Fleur. Cue sheepish looks from her production team... Honestly, with this song title, I expected more from the instrumental hook than a rather fake-sounding identikit brass ensemble sound. It’s not that I’m asking for live sax, but they could at least have done something more creative with samples. There’s plenty of precedent in the dance genre — Alexandra Stan’s ‘Mr Saxobeat’ and Yolanda B Cool & D-Cup’s ‘We No Speak Americano’ both immediately spring to mind. I like the vocal sound, though: squished to a pulp, clearly, but a great example of how compression can help pump up the attitude of a high-energy performance and bring out all those little gnarly background details that are so characterful in slightly ragged-edged voices like Fleur’s. 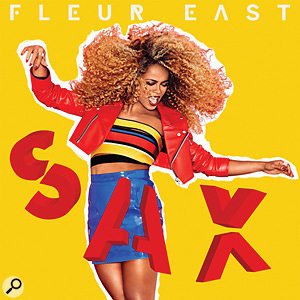 Plus there’s an intriguing little moment leading up to the final work-out, where Fleur presents “wanna hear me sing you better play that sax” a capella. The note on “sing” is higher than any other she sings in chest-voice in this production, and also has that timbre I closely associate with Melodyne breaking a sweat, so I wonder whether it was actually the result of a last-minute mix change. It certainly makes sense from a musical perspective that she sing her highest note at that point, so why not give her a helping hand ay mixdown if she didn’t actually perform it that way in the first place? Mike Senior. 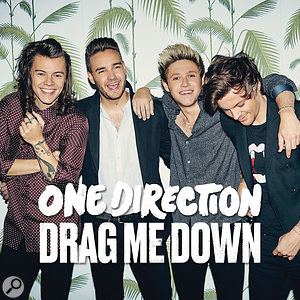 The downbeat of this song’s main half-time hook (first heard at 1:02) certainly packs a punch, carefully prepared as it is through the preceding section’s softer-edge rhythmic build-up and last-bar a capella drop. What’s even cooler, though, is the little game the guitar and vocal play with the second iteration of the “drag me down” lyric two bars later (at 1:09), both parts avoiding the downbeat accent, the former by maintaining its characteristic eighth-note anticipation, and the latter by delaying the word “down” an additional quarter note.

What that downbeat moment also highlights is a burst of what sounds like one of those synth ‘orchestra hit’ patches, which not only contributes to the rhythm by arriving on the downbeat and providing a further rhythmic pulse an eighth-note later, but also by cutting out brutally on the second quarter-note of the bar — neatly leaving space, of course, for that delayed lead-vocal onset. This is a great example of the production adage that a sound’s ending is often just as important as its beginning. Unfortunately, this truism is typically underappreciated amongst recording musicians in my experience, and it’s a rare project-studio pop production that doesn’t benefit from a little editing to tighten up this aspect of its arrangement. Mike Senior 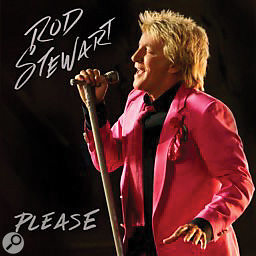 The vocal sound on this single from Stewart’s latest UK platinum album is slightly unusual from a mix perspective, because it relies very little on the mid-range to hold its place in the balance. Instead, there’s masses going on above 8kHz, as well as a healthy dose of sub-500Hz warmth. The reason you don’t often encounter this approach on chart records is that the frequencies that ‘travel’ best (ie. those come through reliably on the widest range of real-world listening systems) tend to be the mids, so it’s almost a reflex amongst commercial producers to ensure that the star dominates this spectral range. In this specific situation, though, it’s easy to see the reasoning, because the scooped contour does play to Stewart’s strengths, emphasising both the intimacy and raggedness which are central to his personality as a vocalist. That the small–speaker translation actually turns out to be pretty decent nonetheless is a testament to how powerfully the vocal lionises the upper spectrum, and also to the way the bass guitar tone leaves plenty of room in the low-mid range for the low end of the vocal to spread out without muddying the overall mix tone. This does mean that the bass guitar sounds a little wiry on smaller systems, by endeavouring to cut through the mix higher up the mid range, but I’d say that’s a reasonable trade-off to make under the circumstances.

Trickier to justify, on the other hand, is that the song’s introductory choral passage seems to be about 30 cents flat... Mike Senior 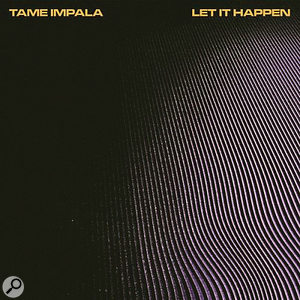 If you’ve yet to discover this Australian psychedelic rock band, whose third album, Currents, recently broke into the UK’s top five, you could do worse than start your tour with this, the lead single. You’d be forgiven for mistaking the sound for a disco throwback on first impressions, but the psychedelia soon makes its presence felt by subverting the normal four-square phrase structure in favour of a three-bar pattern — a surprisingly unsettling thing to listen to if you’ve any familiarity with classic disco, or anything in the current dance charts. Just when you’re beginning to get used to that, little stutter edits appear, with increasing frequency, until the whole thing morphs into an extended strings and phaser breakdown. There’s still another two and half minutes to run after that... Perhaps best not listened to while operating heavy machinery! But in a good way.

Returning to planet earth, I like the kind of reverse psychology going on with the vocal balancing in this track (and indeed on the most recent single ‘The Less You Know The Better’). Because the singer’s quite low in level, and surrounded by a generous cloud of reverb, you have to put in a bit of work as a listener to make out the lyrics. I’ve always felt that a lot of listeners tend to set their playback volume based on how well they can understand the lead vocal, so this record’s vocal balance effectively extends a tacit invitation to crank up the dial. The result? The rest of the production then feels much fuller and more immersive when compared with productions where the vocal’s been mixed more in your face (and are therefore turned down by the listener). Of course, mainstream industry wisdom would have it that such a mix’s competitiveness would therefore suffer compared with mixes from other artists in any normalised playlist — regardless of whether that normalisation were based on peak level or loudness. But so what? I suspect this band’s fans are the kind of people who (Shock! Horror!) still actually listen to whole albums, so I reckon Tame Impala can probably afford to go on ploughing their own furrow in this respect. Mike Senior

This is a fabulous pop production, the apex of a two-year purple patch for producers Bloodshy & Avant, following hot on the heels of other gems such as Ms Dynamite’s ‘It Takes More’ and Rachel Stevens’ ‘Sweet Dreams My LA Ex’. Although perfectly polished, it is nonetheless inspiringly bold in many respects, not least by creating an electro–pop arrangement around such an incongruous pair of instrumental hooks: an exotic-sounding Bollywood strings line and a languorous Spaghetti-Western guitar riff. But there are plenty of other stunts to marvel at: the reversal of the string riff before the second pre–chorus (1:35); the two-bar arrangement drop before the chorus (0:54), which manages against the odds to make a virtue of the most boring electric guitar figuration in the world ever; and the sublime chorus re-entry after the middle section, where the full power of the backing texture only joins in after two bars of heavily effect-mangled a capella lead vocal. 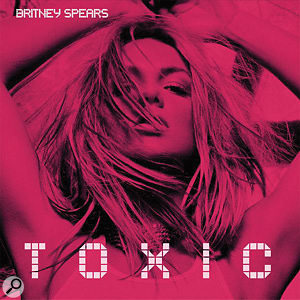 On a technical level, the highlight for me is the bass, which translates phenomenally well to small speaker systems while still sounding admirably porky elsewhere — a feat that long since earned this song a permanent place on my own mix-reference CD. It’s partly a question of solid first and second harmonics judiciously balanced against the synth’s fundamental, but the nice dense spread of harmonics in the mid range below 1kHz and the tasteful resonance peak in 1-2kHz zone also play vital roles.

It’s not just the bass’ sonics that are a joy, though: the programming is also a cut above the crowd. Even the first two C notes (0:15), which so many lesser talents might have just played as vanilla eighths or quarters, are given life here, the first note’s duration so starkly short that it immediately has the impression of skipping towards the second; and the second note’s falling portamento providing momentum into the third snare hit at 0:16. Then there are the numerous little higher-register fills, such as the one underpinning the strings at 0:26; the up-down slide leading into the chorus at 0:56; and the two end-of-bar arpeggiations which draw attention to that signature falling chromatic harmonic progression in the second and third bars of each chorus.

Narrowing of the frequency bandwidth is used to great effect as well — the idea being that restricting the spectrum of one section makes the unrestricted spectrum of the following section appear more impressive. You can hear this trick in action before each and every chorus, as well as during the song’s introduction, the latter a particularly canny commercial move, given that it effectively prevents any preceding song on the playlist from weakening the impact of the first arrival of Britney and the rhythm section at 0:14. Mike Senior