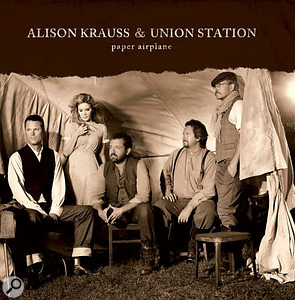 I was fascinated to read the interview with Mike Shipley in SOS July 2011, as I've been following his mixing pretty closely over the years. In particular, it was great to have more insight into his reliance on enormously detailed automation of levels, compression and EQ to get lead vocals almost impossibly solid in the mix — something I've long associated with those big Shania Twain records, but which is amply showcased here too. For that reason alone, this record is worth a listen, simply because it illustrates the extremes to which vocal balancing can be taken in pursuit of achieving consistency of level and tone across an entire song.

However, what I would say is that such in‑depth vocal micro‑management does seem to bring with it a characteristic sound of its own, and one which I'm not sure would suit every project — it's so tightly controlled that it almost feels to me a bit claustrophobic, for want of a better word. Whether you agree with my assessment or not, I think this outcome of Shipley's mixing method is an important one for any aspiring mix engineer to consider carefully, if only to form a clear personal opinion as to where the point of diminishing returns lies when automating any given mix.

Another thing to pull out of the 'Inside Track' feature is the arrangement decisions that appear to have been taken by muting some of the audio regions. This is something that I do in Mix Rescue projects all the time, but a lot of SOS readers fight shy of ditching recorded parts for the greater good of the production as a whole. Take, for example, the Mandolin part here, which in the article's Pro Tools screenshot clearly contains audio even before the start of the acoustic guitar part (which actually begins the song in its released form), but that audio has been muted. One can, of course, only speculate as to the exact reasoning behind leaving this take section on the cutting‑room floor, I could easily imagine that it was done in order to keep the first verses more intimate and vocal‑driven, while allowing the arrangement more leeway to build up into the first chorus — and, indeed, throughout the whole song. Notice, too, the muted Dobro section following the first chorus, which allows the mandolin solo at 1:30 (and the dusting of fiddle) to shine through the mix more effectively. The lesson here is that it doesn't matter even if you've recorded Nashville royalty with top‑flight gear in a pro studio: the mute button can still have a pivotal role to play in presenting an arrangement in the best light. Mike Senior 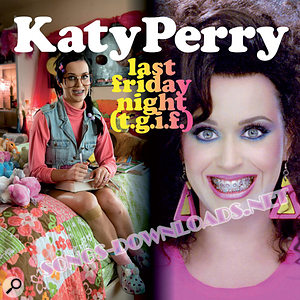 An extremely spiky drum sound here, providing brutal small‑speaker translation. Although the track I've long associated with this kind of drum sound is Perry's previous single 'Hot & Cold', it's possible this one might have the edge, if only in terms of a bit more satisfaction at the low end. As usual, with high‑quality pop productions, slick vocal touches abound too: the subtle stereo double‑tracking for the end of each phrase during the verses (eg. 0:07‑0:22); the low-octave double during the pre-choruses (eg. 0:23‑0:35); and the soft, high, harmony thirds (first heard in the second half of the first chorus from 0:53), which become increasingly prominent as the song unfolds. And it's also some kind of small miracle the way the producers have managed to slip in an '80s‑style sax solo at 2:53 without it sounding too cheesy. The Black Eyed Peas must surely be gnashing their teeth...

But the main thing I wanted to talk about in the context of this track is a strange waveform clipping artifact that I've seen several times before on commercial mixes, particular those of Serban Ghenea. As anyone who's looked at the waveforms of chart tracks in their DAW will probably already know, the practice of clipping mixes as a loudness‑enhancement technique is widespread (for better or worse), especially in styles of music that rely on clicky, sharp‑edged drum sounds. Although the side‑effect of clipping is distortion, this distortion is quite readily masked by bright and aggressive drums, so some engineers consider it a less harmful side‑effect than the timbral softening or drum‑balance alteration that any kind of limiting would typically incur for a similar loudness hike.

Whatever your views about using clipping in this way, though, it's always pretty much been established wisdom that it should, like all loudness processing, be applied as the final stage of the mastering process. And that's why this track puzzles me. If you look at some of the drum hits, you'll see that most of them are flat‑topped at the ‑0.1dBFS level, but there's also a more‑or‑less flat diagonal section following some of the horizontal clipped waveform regions. What this says to me is that the original mix has been clipped, then high‑pass filtered, and then clipped again — high‑pass filtering any file with flat‑topped drums will tilt the flat region of the waveform off the horizontal. Assuming that I've arrived at the correct conclusion about this, what it strongly suggests is that Serban Ghenea is delivering clipped files to mastering, but that the mastering engineer (Brian Gardner in this case) is not rejecting them with the stream of invective that most of us would expect. So what's going on here? 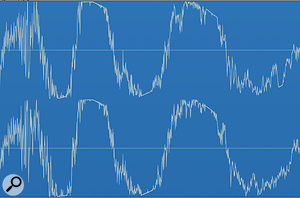 Here's a small section of the waveform of Katy Perry's hit 'Last Friday Night', showing the kick‑drum hit at 1:56. Notice the flattened diagonal sections of the waveform, which suggest to me that this mix was already clipped before it even reached the mastering stage.While the horse's mouth remains firmly closed on this issue, as far as I've been able to ascertain, my take on it is this: Serban Ghenea specialises in the kind of music that is often clipped at mastering, and has decided that because the distortion artifacts will inevitably affect the tone of his drums, he wants to be aware of the ramifications of this while mixing. After all, many engineers have already gone on record that they mix through a bus compressor (or even a mastering‑style limiter) so that they can compensate for the gain‑riding effects during the mixing process. However, the fact that Ghenea isn't bypassing the clipping to generate his final mixdown file means that he's effectively taking the choice of what type of loudness processing to use out of the mastering engineer's hands. Once a file is clipped, you can't substitute limiting for the clipping.

Which leads to numerous further questions. Is Ghenea doing this because he doesn't trust record companies and/or mastering engineers to loudness‑process his mixes with as much clipping as he'd like? If he's got enough industry clout to get away with delivering clipped mixdown files, then why doesn't he have the clout to deliver unclipped files and then dictate clipping levels to the mastering engineer — surely a more successful approach in terms of final sonics, especially where EQ is required to match different mix tonalities on the same album? And on what basis can we recommend that students of chart‑style mixing deliver unclipped files to mastering, when arguably the most successful mix engineer on the planet appears to have his reasons for doing otherwise? Mike Senior 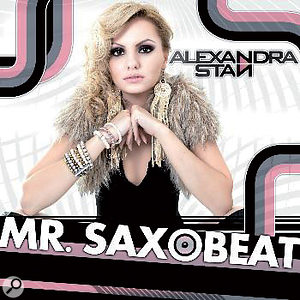 For a dance single that apparently presents such a simple surface thematically, I love the way the producers here keep gently wrong‑footing the listener. The 13‑bar introduction is probably one of the most obvious examples, but Alexandra Stan's vocal hook (first heard at 0:28‑0:36) offers a more subtle demonstration. Notice how the characteristic syncopated rhythm momentarily straightens up for the last beat of bar two, for instance, and how the word 'freak' is pushed ahead of bar four's downbeat later on. This is the kind of variation that many people simply don't bother to put in, but I think it's a real part of what keeps the vocal at the forefront of your attention, and helps it stick in your head. I also like the way the rhythmic background synths during the choruses include nice little descending, four‑note scale fragments — another great detail that is functionally quite unnecessary, but nonetheless enriches the musicality of the production, and probably increases the likelihood that people will want to hear the track more than once. Mike Senior