It was a great year for Sound On Sound in 2005 — we celebrated our 20th birthday and produced a couple of feature-packed commemorative DVDs. These turned out to be extremely popular, and consequently we'll be increasing the amount of audio content on our web site, as feedback suggests that this is very helpful, particularly in the case of reviews and our practical 'how to' articles. So if you didn't get broadband for Christmas, now is definitely the time to think about it — broadband is no longer a luxury for computer musicians, it is an absolute necessity. 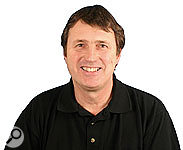 Over the coming year we'll be doing our best to keep ahead of the game by introducing new ways of exploring recording and mixing principles, much as we did with our popular Studio SOS series. Studio SOS was a magazine first and we'll be continuing it for as long as the roads of the UK remain open to traffic, as it's not really possible to take six sheets of acoustic foam or a rack of sound processors on the bus or train, and acoustic treatment is unlikely to be replaced by plug-ins any time in the near future!

Christmas 2005 saw the launch of our new Mix Rescue series, which we hope will be equally popular. As you probably gathered from the first instalment, which ran in our January 2006 issue, the idea is that we take your multitrack files and a copy of your original mix, then try to improve on the mix. We don't want to create a 'remix' in the dance music sense, where everything is changed or added to, but rather retain the original intentions of the composer as far as possible. That doesn't mean to say that the odd track won't get edited, re-recorded or dumped, but whenever possible we'll avoid it.

At the time of writing, we've completed two of the remixes and have just started working on a third, and the most interesting thing we've noticed so far is that, as you might expect, the source material ultimately determines how good a job you can do. Not only do the performances need to be in tune and in time, but also cleanly recorded and available to us without added effects or processing, so that we can give the job our best shot. I've found the work so far to be very rewarding, and even where projects can't be brought up to release standard, it's very informative to be able to explore the limits of what is possible.

I do get the impression that some musicians still put too many parts into their recording — why would you need six distorted guitars playing at the same time? If there's too much happening, your mix gets congested and loses its sense of space. It's also important to choose the right sounds so that they don't conflict with each other.

So far we've asked readers to send in their tracks as WAV or AIFF files so that we can process them, and I'm also keen to make sure that track numbers stay under control. This month's remix comprised a large number of tracks, but in an ideal world, a limit of around 24 would be more practical, as it helps save my sanity and stops my hard drive seizing up!

Our aim is to put the 'before and after' mixes on the Sound On Sound web site (or DVD when appropriate), as well as any individual tracks where the processing has been particularly important. These will augment the magazine article, which will explain the processes used and show the settings of any plug-ins or processors used in the remix. Personally I'm very excited about this Mix Rescue series, not least because it means that I get to spend more time in the studio and perhaps a little less in front of a word-processor package!

So if you have a mix that's giving you problems, please get in touch. We only have the capacity to do one a month, so if you can email us an MP3 of at least part of your mix, it will help us decide what is most practical and most likely to be informative. Hopefully, homing in on common mix problems will mean that everyone can benefit from the experience.