The Ribbon Guy By Daniel James

When RCA abandoned ribbon mics, Wes Dooley of AEA believed they still had a place in the modern studio — so he set about making his own. 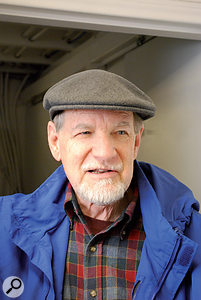 Wes Dooley in his reel-to-reel years.

We automatically associate Los Angeles with Hollywood and the entertainment industry, but it is also a city of engineers. Wedged between the sprawl of LA and the San Gabriel Mountains, the college town of Pasadena is home to NASA's Jet Propulsion Laboratory and the California Institute of Technology (known as Caltech). It also houses the headquarters of Audio Engineering Associates, the manufacturers who have perhaps done more than any other to bring high-quality ribbon microphones back into widespread use.

The AEA factory is a modest, single-storey building in a residential neighbourhood. Its lobby contains an extensive reference collection of vintage microphones, including the RCA ribbon designs from the 1930s onward that AEA have helped bring back into vogue. The invention of talking pictures created strong demand in Hollywood for high-quality microphones like the RCA 77 series, with their iconic pill-shaped bodies and central axis mounts. 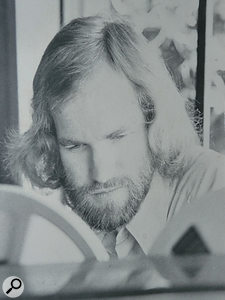 The vintage Ampex tape machine in AEA's test room is another reminder that the modern sound-recording industry began just a few miles away in Hollywood. It was Bing Crosby's desire to pre-record his radio shows that led to him putting up the capital for the Ampex company to start mass production of reel-to-reel tape machines in the USA. Recordings no longer had to be cut directly to acetate disc, making all kinds of studio manipulation possible. One of the very first Ampex machines was given to Les Paul by Crosby, enabling Paul to perfect his overdubbing technique. The Les Paul Trio had already enjoyed a US number one hit backing Crosby on 'It's Been A Long, Long Time' in 1945, and legend has it that it was Crosby who suggested building the original home studio in Les Paul's Hollywood garage. Radio engineer and DJ Sam Phillips purchased two Ampex 350 machines for his Memphis studio in 1954, the same year he auditioned Elvis Presley.

We may think of the Shure 55 as the 'Elvis mic', but look closely at photographs of Presley's Louisiana Hayride debut in 1954, and you'll see that radio station KWKH had provided a ribbon mic for the lead singer. The backing band had to make do with gathering around the cheaper Shure dynamic mic. RCA ribbon mics were built by craftsmen, with a commensurate price tag, although some radio and recording engineers managed to obtain them as US Government war surplus. The new condenser microphone designs of Georg Neumann, sold under the Telefunken brand name, had yet to take over the American recording market. 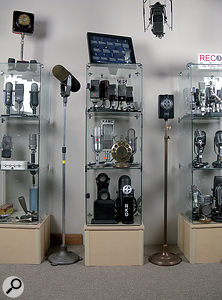 AEA maintain an extensive reference collection of vintage microphones!In the 1950s, being a producer and recording engineer meant building much of your own equipment. Bill Putnam covered all bases by founding both Universal Records and Universal Audio. Relocating to Hollywood from Chicago, Putnam started the UREI studio equipment company, and acquired the company that became Teletronix. He also developed two studios, United Recording and Western Recorders, a block apart on Sunset Boulevard, which became known as the United/Western complex. Recordings made at United/Western included sessions for Bing Crosby and Frank Sinatra, who had both invested in Putnam's studio ventures.

Putnam was assisted at Western by Wally Heider, a former lawyer who was able to break into the top flight of the recording business because of his passion for making live recordings of big bands. By the time Putnam hired him as a setup technician, Heider was already well-known to some of the musicians recording at Western. Band leader Stan Kenton asked for Heider to engineer his recording on Heider's second day at the studio. This unprecedented promotion started a career which would lead to Heider creating the 'San Francisco Sound' of the late 1960s, including recording Jefferson Airplane, Creedence Clearwater Revival, Crosby, Stills & Nash and Neil Young.

Before moving to San Francisco, Heider mentored a young student called Wes Dooley, who was attending Pomona College during the early 1960s, and was beginning to make recordings of his own. "As Wally Heider taught me, microphone positioning is more important than anything else you do as an engineer. If you have great musicians, you can make a great recording if you put the mics somewhere useful.” Heider told Dooley that EQ was only to be used in emergencies, and to try different microphone positions or changing the microphone first. "Wally said, you never want to get into a situation where you're trying to fix it later.” 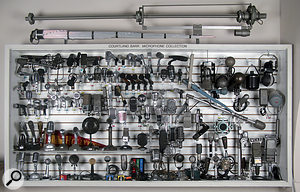 Even more of AEA's jaw-dropping collection of historic microphones.

Dooley had joined the staff of the Pomona College radio station in enrolment week, and began hanging out in Los Angeles nightclubs. "A friend of mine was doing a folk show, and I thought that was ultra-cool, so for the next three years I did a folk show. Only, playing records (even when I was the first one to break Bob Dylan in LA — I think I played 'Baby, Let Me Follow You Down') wasn't nearly as much fun as going to the Ice House, the Troubadour and the Ash Grove.”

He soon began borrowing the station's tape machine to make after-hours live recordings, with scant consideration for electrical safety regulations. "The station went dark at midnight, so I pulled the Ampex 350 out of the cabinet, and with everything exposed so you could kill yourself, put it on a cocktail table at the Troubadour.”

Some of the bands would oblige Dooley with an impromptu recording session. "I talked to the Clancy Brothers and Tommy Makem and they said 'Oh yeah, we'll stay after 2am and do a radio set for you.' I had one reel of tape, of course, so that tape became some weeks later someone like Lightning Hopkins, or Sonny Terry and Brownie McGhee. I started with the Electro-Voice 664 dynamic mic. Bob Gerbracht, a friend of mine at Caltech, went to an auction at Hal Roach's Culver City movie studio, where they had a Telefunken U47 that no-one bid very hard on, as it didn't have a power supply. So, like most people in the early '60s, we built our own power supply.” (Gerbracht went on to complete his physics doctorate, and his computer programming would later help NASA bring Apollo 13 safely back to Earth.) 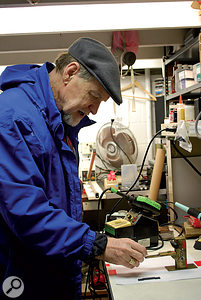 AEA's new-old-stock RCA ribbons are just 1.8 microns thick, and have to be 'crinkled' (corrugated) by hand so that they can move in response to sound pressure."In the process of doing all this, I met Wally Heider, who came over to the Ice House, where I took care of the sound system. Frank DeMedio, the chief engineer from United/Western was there with him, as they were good friends. Wally at that point was still working at United/Western with Bill Putnam, before he split off and started his own business. We had a couple of quarter-inch two-track machines, one with home-brew electronics. Frank DeMedio had built a three-track on a quarter-inch Ampex 351 deck, expanded out to half-inch. Wow! Stereo, plus Jackie DeShannon's voice in the centre! You could rebalance the voice later!”

After shows, Dooley would give Heider and DeMedio a hand loading equipment into their rented bob-tail truck. The engineers said, "Could we hire you to do this?” Dooley would have happily helped for free, but he was being offered a job moving gear and running the cables. So Dooley got to hang around at the Hollywood studios, watching and learning. "Through Wally, I got introduced to Bill Putnam. I got to see 6000 Sunset Boulevard, where Western was, and Studio A where Sinatra got recorded.” Heider told Dooley to put the old RCA 44 and 77 ribbon mics up for brass and woodwind, rather than the modern condenser mics — training that would prove very useful, many years later.

With the help of splitter boxes designed by Frank DeMedio, it was no longer necessary for bands on tour to stay late at venues and record a second set, just for Dooley and his friend Bob Gerbracht. "We built stuff for some people in Germany, and they traded us a pair of Telefunken U67s without power supplies. So I was incredibly lucky — at age 21 I had a pair of U67s and a U47. I'd set those up as main mics on stage, give a split to the PA, and make a little mix on our custom four-by mixer. That made my radio show.”

Dooley now regrets that he only owned that one reel of tape in those days. "Now, I tell people: save everything! Media is cheap! Keep good notes so you can find it again.” At the time, Dooley didn't know anything about syndication, either.