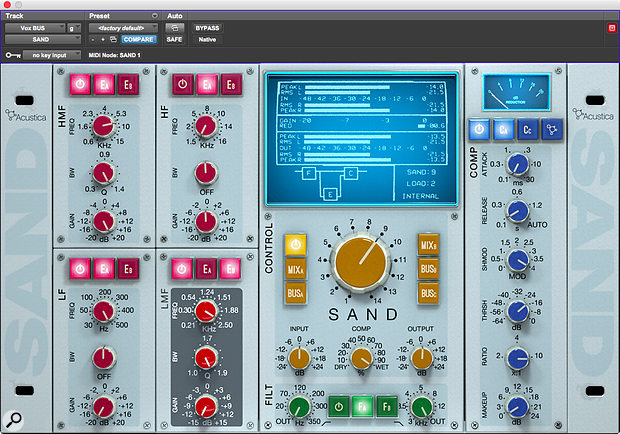 Most software emulations of analogue devices are created using so-called ‘modelling’ techniques, which attempt to simulate the behaviour of individual components or circuit blocks. However, Acustica Audio have long championed an alternative approach called dynamic convolution. Somewhat analogous to multisampling, this involves sending a series of impulses or sine sweeps through the gear being ‘sampled’, at different settings and signal levels, and then convolving the resulting library impulse responses with input audio to recreate those settings.

There is widespread agreement that dynamic convolution can sound great, and its advocates claim that it recreates devices such as classic compressors with a faithfulness that modelling techniques rarely, if ever, match. Historically, however, it has been held back by the associated down sides of heavy CPU load, rapacious consumption of memory and drive space, and the perception that some sort of higher qualification in computer science is needed to make it all work.

As computers have got faster and more capacious, resources have perhaps become less of an issue; and Acustica Audio have been working hard to simplify the user experience with their Acqua range of plug-ins. The first one of these I tried was the White mastering equaliser, reviewed in July 2016 (www.soundonsound.com/reviews/acustica-audio-white), which sounds great and is extremely straightforward to work with, if a bit sluggish in its response to user control.

The Time Of Sand

The subject of this review is a channel strip called Sand, the latest and most ambitious plug-in in the ever-expanding Acqua series. Sand is notable partly for being the first plug-in to use Acustica’s latest Core9 engine, said to offer further efficiency gains over the Core7 engine used by White, but also for offering much more flexible routing than is usually possible in convolution plug-ins.

To create Sand, Acustica have separately ‘sampled’ a selection of preamp, EQ, filter and dynamics sections from classic British recording consoles made in or near Oxford. A central rotary switch lets the user choose between 16 different preset routing configurations. The reason there are so many different options here is that Sand can work with an external side-chain signal, so not only can you switch the order of the EQ, filter and dynamics, but you can also switch the EQ and/or filters into the internal or external side-chain in varying combinations. (External side-chaining works as expected in the AAX and VST3 versions, but it’s not currently supported at all in the Audio Units plug-in, and getting it to work in VST2 hosts requires the old-fashioned bodge of inserting Sand on a four-channel bus and routing the side-chain signal to channels 3/4 of this bus.)

Install Sand and you’ll find two versions of the full plug-in, called Sand and SandZL. The latter is designed for use when tracking: both versions impose significant latency, but SandZL does not report this to the host application, so won’t provoke latency compensation to add delay to any input signal. For situations where the full channel strip is not required, you also get the preamp, EQ and dynamics as separate plug-ins, though these look rather different from their counterparts in Sand itself, and for some reason the compressor plug-in only includes one of the two compressor designs available in Sand. As with White, Acustica’s new focus on ease of use is let down a little by a cumbersome licensing procedure and by the provision of multiple installers for different formats, but once that hurdle is cleared, it’s plain sailing.

All of this is explained in a helpful but bizarre user manual, which alternates sections made to appear photocopied from a 1980s console manual with excerpts from travel brochures. Thus: “Two large volcanoes sit side by side, the West Maui Mountains, whose highest point is Pu’u Kukui, and Haleakala, the larger of the two, located on the eastern part of the island. These huge geological structures are amazing. Our hope is that Sand, with its dual switchable EQ section, may evoke the same feelings.” Er...

Whichever routing scheme you select, the preamp stage is, so far as I can tell, always first in line, with an input gain control allowing you to drive it harder if you wish. The Mix A and B options are console line inputs, while Bus A, B and C emulate internal gain stages within consoles, such as that used to drive the bus compressor. All have different distortion characteristics and phase responses, which are described in the manual just after the section introducing the delights of Madagascar. In practice, I found the differences very subtle, even when I cranked the input gain, and often left the preamp stage switched out to save CPU cycles.

Sand’s EQ and filter section is also available as a separate plug-in.

Less subtle — much, much less subtle — is the difference between the two types of EQ on offer. In fact, if you are one of those people who thinks that all digital EQ sounds the same, flipping between Sand’s A and B modes ought to shake your convictions pretty thoroughly. Each band can be switched individually between these two modes, and the effect of doing so can be startling. The A type, representing the ‘G+’ variant of that classic British console, has a forward, decisive, ballsy quality which stamps its authority on any audio within 100 yards of it. The B type, ‘sampled’ from a later 5000-series desk, is more the iron hand in the velvet glove, reining in frequency excess or adding heft and sparkle without obviously revealing its presence. Both feature fully parametric upper and lower mid-range bands, plus high and low bands that are shelves in EQ A but parametric in EQ B. All have somewhat different frequency ranges in the A and B variants, but both offer more than enough flexibility for common tasks, and what they do have in common is that both sound great. As with White, you just get the feeling that, compared with most EQ plug-ins, there are far fewer ‘wrong’ EQ settings and far more ‘right’ ones for any given audio input.

The down side, compared with both hardware EQs and most plug-ins, concerns the way in which you interact with it. Most of us, I imagine, are used to sweeping an equaliser’s frequency and gain controls and hearing the sound change as we do so. It doesn’t quite work that way with Sand; there’s a lag of a second or so in response to any user input, so when you move a control, you have to wait for the sound to catch up before you can hear what it’s doing.

Turning next to the filter section, the case for including two complementary sets of lovingly ‘sampled’ high- and low-pass filters is perhaps less compelling, but both A and B certainly do the business, with widely variable cutoff points that enable you to precisely remove crud at the bass end and nasty high-frequency hash. Naturally, there are a number of routing configurations where these are switched into the compressor side-chain, which is probably where the more extreme settings are likely to be useful.

Compressor, I Can Boogie

That compressor is the other major selling point of Sand, and again, two variants are included. In this case, however, while the A variant is a faithful recreation of the original console bus compressor, the C compressor replicates one of the many ‘improved’ SSL designs out there. In both cases, you get the standard SSL range of switched attack, release and ratio settings, including an optional auto-release, plus make-up gain. There’s also a mysterious control labelled ‘SH-Mod’, which is said to control the “shape modulation of the attack envelope”. If I understand the graphs in the manual correctly, low SH-Mod values produce what you might call a decelerating attack curve, with a fast initial response that slows down as it reaches the required level of gain reduction, while high values reverse this, generating a response that is initially sluggish but which accelerates. It seems to make a big difference to how the compressor responds to bass content in a full mix, and increasing the SH-Mod dial has similar effects to filtering out the low frequencies in the compressor side-chain. Finally, as well as the bypass button and buttons to select A or C compressor types, there’s also a button bearing the Acustica Audio logo, which apparently engages ‘Insane’ mode. This, one assumes, has something in common with the Crush mode found in designs like the Alan Smart C2; it makes the action of the compressor much more obvious and adds quite a lot of upper-mid brightness and distortion.

The Sand Bus 4 plug-in packages the A version of the compressor as a separate unit.

I’m not much of a connoisseur when it comes to SSL-style compressors, and generally find them a bit heavy-handed for my tastes, but there’s no denying that this one does exactly what they are supposed to. With short attack times, the compressor exercises an iron control over the dynamics of a mix, yet without rendering it lifeless: perfect if you’re the kind of engineer who likes to mix kick and snare very loud and have them pushing against the bus compressor to lift everything else. At the 10ms or 30ms setting, meanwhile, those drum hits come through unscathed before the gain reduction kicks in, allowing you to introduce the kind of ‘bounce’ that makes everything sound a bit more alive. Both approaches make it easy to achieve a forward, in-your-face sound, and with the ability to switch EQ and filters into the side-chain, there’s plenty of flexibility on offer in terms of tailoring the compressor response to your mix.

Naturally, the compressors are also very usable on individual tracks and buses, as well as on complete mixes. As an exercise in indulgence, I set up a complete instance of Sand as a de-esser, putting the EQ in the compressor side-chain and boosting 7kHz while cutting as much mid-range and bass as I could. Though I’m not sure I’d often want to devote so many CPU cycles to such a mundane task, it proved extremely effective! The only slight peculiarity I ran into was that when I used the compressors on clean bass guitar, both the A and C modes seemed to add a strange artifact almost like fret rattle to note attacks, regardless of attack and release times. Apparently no-one else has reported this, so hopefully it’s a quirk of my system.

Talking of CPU cycles, it’s clear that Acustica are making strides in the efficiency department with the Core9 engine used by Sand, and on my machine it is a noticeably lighter burden than White, but this is still a channel strip for special occasions! You’d need a powerful machine to use instances on every channel as a virtual console, but where a source really matters, the sonic benefits are definitely worthwhile. Speaking for myself, I’ve got most use out of the EQ; but if you’re an aficionado of SSL-style compression, I suspect you’ll like Sand’s take on it a lot. Acustica are really onto something with this new Acqua range, and I look forward to my next encounter with an Acqua plug-in.

There are innumerable software recreations of pretty much every generation of SSL EQ and compressor, though most are based on modelling rather than convolution. Among the obvious choices are SSL’s Duende Native, as well as SSL-endorsed offerings from Waves and Universal Audio.

Acustica’s Sand is perhaps the most desirable SSL-style channel strip yet created in software.