The Force has a comprehensive internal mixer based on the excellent MPC software mixer. The main mixer screen gives you metering and touch-controlled faders for the tracks that are currently on the grid. Alternate views provide access to sends and inserts. A dedicated Master button on the pad grid opens a screen for controlling master outs and effects returns.

The mixer screen provides control of automation mode, record arm, mute and solo, although the last three of these can be controlled from the grid. If Cue Tracks mode is active, the solos become cue buttons, routing tracks to the headphone output and isolating them from the main mix. 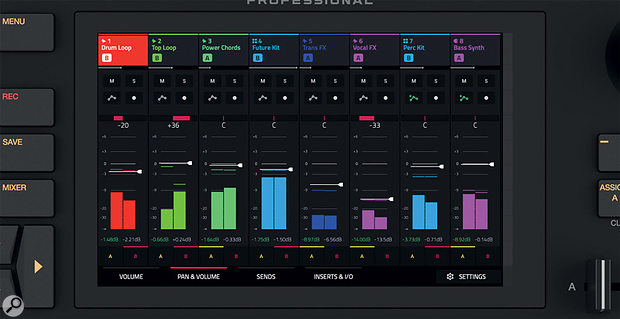 Tracks can be mixed to A and B buses for crossfading.

Also with performance in mind, the Force has a physical crossfader and an A/B routing system just like Live's mixer. There are dedicated buttons under the fader for assigning tracks to the two buses, or you can do this from the mixer screen. Akai have hinted about adding Octatrack-style parameter control to the crossfader in the future, which would be really cool.

The Force share's the MPC's generous stash of built-in plug-in effects, which can be inserted on tracks, effects returns, master outputs, or individual pads in drum kits. Pretty much every category of signal processing is covered, and often duplicated. This is because you get all the classic MPC effects, and then the newer suite of AIR plug-ins. As a Pro Tools user I'm familiar with these effects, as they are part of its core plug-in bundle. The reverbs are great, and the Frequency Shifter and Filter Gate never get old. All the UIs have been reworked for fast and simple touch control.

On top of all this you get the XYFX Mode, which brings Kaoss Pad-inspired performance effects to individual tracks or the master mix. There are several flavours of effects here, but I love the classic filtered beat repeater for adding interest, builds and glitches.

With such a rich set of features and sound sources I found myself working independently in the Force, creating whole song ideas or performances. This is when I hit a snag: what do I do with these ideas? If I was simply setting up the Force for a manual live performance all would be well. But when you want to create an arrangement, export to a DAW, or even make a mixdown your options are severely limited.

I settled on capturing the song ideas I made in the Force by mixing out their tracks to the four analogue outputs and recording a live arrangement into Pro Tools. This gave me a starting sketch to work on, but seemed very primitive. I'd actually be pretty happy with this workflow if I could split out to more outputs or a multi-channel USB stream like Elektron's or Roland's instruments.

Most workstations and drum machines have the ability to chain patterns or scenes as a playlist (eg. MPC Song Mode), or even have their own timeline (eg. Maschine). Of course MPC projects can also be opened in Akai's own DAW software and finished there. Ableton Live has by far the best solution with its Arrangement view, which can capture an entire scene/clip launch-based performance as a multitrack timeline. The Force currently has none of these options.

So here's the good news: more features are in development to address this limitation. First will be the Ableton Live project export, providing a way to take the bones of an idea you've created in the Force and transfer it to Live. Further down the road Akai have hinted at a song mode for the Force that would realise its full potential as a stand-alone end-to-end music production system. Like Live's Arrangement, this would add a timeline that could capture a performance from the Matrix, and overlay linear recordings.

I hugely enjoyed my time with the Force. I got out of the studio and spent a lot of time with it noodling with headphones and capturing ideas. I recorded a lot more bass, guitar and live synths than I would normally. Its appeal is just having everything ready to go. I loved that it had my entire sound library inside. And the four on-board synths give you plenty to get your teeth into. Even purely as a drum machine and sampler it's a great thing to have in the studio, with the brilliant MPC drum engine and XYFX.

If you ever do any kind of live performance it could be an invaluable tool, potentially replacing a laptop, controller and audio interface with a single road-ready device. It can play and tempo-match stems, clips, drum and synth patterns, and even serve as a fairly versatile MIDI sound module for synth and electric pianos. Memory would be an issue for audio-based backing tracks, though, so I hope that might change in the future.

The Force already does a lot, but there's headroom for it to get much better, especially with respect to stand-alone arrangement and finishing. The upcoming Ableton integration will open up new possibilities, and if Akai can pull off the linear timeline mode they're hinting at (something Native Instruments seem to have abandoned in Maschine) then I'm going to be all in.

The Force straddles a number of different categories. As a music production workstation it has many of the same qualities as the MPC, but with a fundamentally different workflow. As a drum machine and performance sampler/looper, it could cross swords with Elektron's Octatrack, which is a lot harder to use but has its amazing snapshot morphing feature. As a DJ side-cart it offers way more than the similarly priced Pioneer Toraiz SP16, although the latter does have a song playlist function. In all categories it faces Live and Maschine, both of which it can see off if you need a laptop-free solution. Live with a Push and TouchAble on an iPad can give you a similar, and more powerful, setup overall, but there's something compelling about having everything in one ready-to-go device.

Akai are marketing the Force as a crossover music production and DJ performance product. Certainly it's supremely well set-up for live performance, with its dual grid/screen control, crossfader and cue system. A lot of acts use Live as a flexible, interactive backing track and I imagine a stand-alone hardware alternative would be tempting. Likewise, the Force has a lot to offer the more adventurous DJs and EDM performers who like to spin in their own tracks, effects and stems.

I did experiment with loading up complete stems to see how the Force would cope. It did an OK job of tempo detection but needed some help here and there. It's fairly quick and visual to set a cue point. One thing that is really solid compared to many devices is the tap tempo.

For use as a live electronic music hub you'd need to think carefully how you prepared your set. You might want to avoid having to load new projects on the fly, and Ableton users often create a giant session containing everything they need for a whole show. A top trick up the Force's sleeve for gigs and DJ'ing is that you can save and load individual tracks, so you can import a pre-prepared stem or set of clips into an open session. I used this trick to save a ready-to-go guitar channel as well.

There's one significant limitation that would make me think carefully about whether the Force would work for me as a live hub. The Force cannot currently play audio from disk: all audio in your project has to be held in RAM (of which the Force has 2GB). This memory can get used fairly quickly when you're opening or recording longer chunks of audio. As a test I loaded a 4 minute stereo file and duplicated it a few times. The memory maxed out with the seventh duplicate. 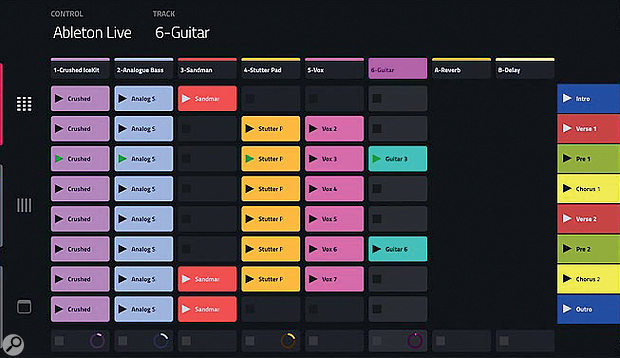 The MPC Live and X double as controllers for MPC software, so you might imagine that the Force would do the same. Instead the Force is an Ableton Live controller; it really is a hybrid of Akai's MPC and APC products. The Live functionality wasn't available for testing during the review, but there are a couple of sneak peaks on YouTube.

As the Force's stand-alone workflow is close to that of the Live Session view/Push combo, much of the functionality maps straight across. The main Matrix and Mixer views look similar. You appear to have access to device and macro control on the screen too. There are some limits to what Ableton expose to third‑party controllers, so you won't get waveform editing, for example. The TouchAble iPad app has pretty deep control, including Library browsing, so I'm curious to see how far the Force can go.

An unexpected feature is that the Force can maintain its regular stand-alone functions at the same time as controlling Live. You can toggle back and forward between the two. You can run the Force and Live in sync via Ableton Link, and could potentially route Live's audio through the Force. With the crossfader this opens some intriguing possibilities.

The other important feature is Live Session file export from the Force. You'll be able to pack up your Force project and transfer it to Live, with your audio and MIDI clips all intact and laid out in the same way. I'm interested to find out how far this goes. Will the mixer settings transfer? What about the plug-ins? Korg's Gadget has the rather brilliant ability to move its projects to Live and keep the plug-ins live as they're cross‑platform between iOS and VST. That may be asking too much, but we'll have to wait and find out.

The Force combines the incredible connectivity and sonic arsenal of the MPC with the agile real-time performance abilities of a clip grid launcher. It's a powerful instrument and performance tool, with the potential to grow into a Music Production Centre in its own right.