The easiest way to hear sounds A and B is to select Single timbrality and sweep the Morph knob from one extreme to the other, which slides almost every parameter from its value in A to its value in B. Almost? Well, there are some parameters, such as polyphony and timbrality, matrix connections, effects routing and types, for which morphing would be either impractical or nonsensical. But if you want A to have one set of matrix connections and B to have a different set, you can set things up so that the second set has zero Amounts when A is selected, and vice versa. It took me a while to get to grips with this but, once mastered, the sound design potential of Morphing became staggering. A number of additional housekeeping functions help you to manage your Morphs, allowing you to import A or B from an existing patch into the edit buffer of the current patch, copy from A to B, and swap A and B. Then, once you've created the perfect Morph, you don't have to save the patch at either of its extremes because the Morph knob position is itself stored as a patch parameter. Of course, the Morph position is also a matrix destination, and the possibilities suggested by this are again enormous. 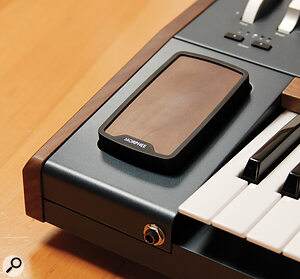 The Morphée offers an additional and versatile performance control.The Motion Recorder is another welcome facility. This allows you to record the motion of a single control and save it as part of a patch. Making a recording is simple and, when you replay it, you can do so at a speed ranging from 12.5 percent to 800 percent of the recorded speed, either once or looping indefinitely. My experiments showed that replay is per-voice rather than per-patch, which is excellent. The most flexible use for this is to record the Morphée in Matrix mode, because that allows you to modulate and loop up to 32 parameters simultaneously.

The number and flexibility of the performance controls on the PolyBrute is laudable, but that hasn't stopped Arturia from indulging in a bit of hyperbole when describing the Morphée. Nonetheless, a pressure-sensitive pad is an excellent facility, even when it looks like someone has left a wallet on the side of the keyboard. If you select the Matrix as the pad's destination, its X, Y and Z axes are directed to the J, K and L rows respectively. Alternatively, you can use the pad to control aspects of the arpeggiator and sequencer, with the X axis affecting the velocity and the range of octaves played, the Y axis affecting the Gate time, and the Z axis adding ratcheting. But I suspect that you'll most often use it to control morphing.

With this mode selected, the X/Y response is not easy to describe (the manual fails to do so too — see box) although the Z axis is simple to understand; it again sends its value to the L row of the matrix. Whichever destination you choose, you can determine the Morphée's response mode. In Tap mode, the bottom left-hand corner returns a value of (0,0), the top right-hand corner generates (127, 127), and the output returns immediately to (0,0) when you stop touching it. Hold mode is the same except that the last value is retained when you lift your finger. In Scan mode, the first place you touch is defined as (0,0), the rest of the pad is scaled appropriately, and the values slew (rather than jump) back to zero when you lift your finger. In Hold Scan mode, the last value is again retained when you lift your finger. 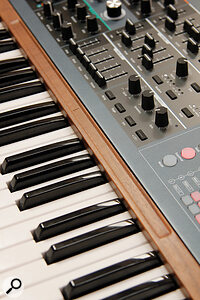 Not just a handy recess for spare change, the wooden groove above the keyboard is also a ribbon controller.The ribbon controller can also be routed to any available parameter via the matrix and it offers the same absolute, absolute/hold, relative and relative/hold modes as the Morphée. These can again be chosen on a per-patch basis which, in my opinion, makes it a very friendly ribbon controller. Similarly, the wheels have per-patch options, and the modulation wheel offers four destinations: the Matrix, the Master Cutoff, the LFO1 amplifier and Vibrato. The last of these directs a dedicated (and otherwise invisible) sine wave LFO with three predefined speeds of approximately 3.4Hz, 5.6Hz and 10Hz to the pitch, releasing the programmable LFOs from this simple duty.

The PolyBrute incorporates a 32-note arpeggiator, a 64-step sequencer and a 16-step 'matrix arpeggiator', and all the data that define each of these are saved on a per-patch basis.

Arpeggios can cover one to four octaves, with six conventional playback modes plus a seventh that generates quasi-random patterns from the depressed notes. The rate ranges from 30 to 240 bpm, and you can define the clock ratio, Gate length and Swing. The other controls are for Hold and Tap Tempo. If you stumble across something that you want to keep, you can convert arpeggios into sequences, either to save them or to edit and then save them, which brings us to... 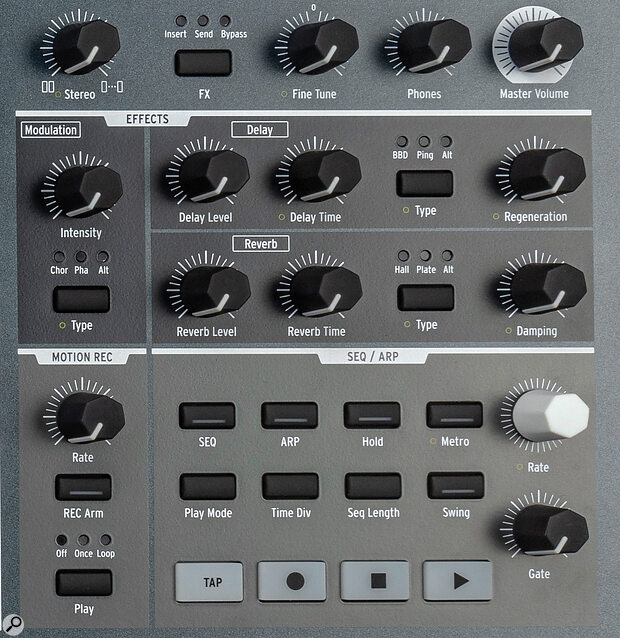 The PolyBrute's sequencer. In some ways this is similar to a polyphonic version of the MatrixBrute v2 sequencer, but offering six-note polyphony on each step. When recording in real time (with or without the built-in metronome) it stores velocities, durations and the movements of up to three knobs and sliders, and you can overdub if you have too few hands to do everything simultaneously. You can also enter and edit sequence data in step time, adding notes, erasing or replacing notes, adding accents (which set the note velocity to 127 no matter what the recorded velocity is), adding slides and ties, changing the durations of individual notes or all of the notes in a step, muting and unmuting steps, muting updating and erasing modulation tracks, and more. You can also copy and paste short sequences to create longer ones up to the maximum of 64 steps. (Sequences can have any length up to the maximum, even though it appears at first sight that only 8, 16, 32 and 64-step options are available.) Other commands allow you to delete sequences, erase notes while retaining the modulation tracks, erase the modulation tracks while retaining the notes, and to copy and paste sequences (with or without the automation tracks) from one patch to another. You'll make a lot of use of the matrix buttons when programming all of this because each group of three rows displays the on/off, accent and slide status of each note. The colours of the buttons are also key to programming, because they are the means by which you can tell what's active and what it's doing as well as when.

On playback, the keyboard is split, with the Lower zone triggering and transposing the sequence and the Upper zone allowing you to accompany it. However, the sequence replays at the pitch at which you recorded it only when you press C2. When you play above or below this, the sequence is transposed accordingly. This means that, if you recorded a sequence in F#, it will be replayed in F# when you press C. If you then want to transpose it to (say) A#, you'll have to play... umm, let me see, that would be E. If you're playing over the top of this, you're going to get confused. Arturia suggest that you record every sequence in C and then transpose it as required, but better solutions would be to provide a root note parameter, or to make the note that initiates playback the root. Furthermore, any accompaniment played in the Upper zone appears to take precedence over whatever is being played by the sequencer, so note stealing can occur and, if you get carried away, you'll end up with little or nothing emanating from the sequencer itself. But whatever else is happening, the output from the sequencer is always available as a polyphonic source in the matrix, so you can obtain yet more modulation effects on a per-voice basis.

There's also a third SEQ/ARP mode called the Matrix Arpeggiator, which is a hybrid of the arpeggiator and the sequencer that allows the matrix buttons to determine which notes in a held chord are played on each step, at what octave and with or without a slide or accent or both. Again, you can record three modulation tracks, and many of the sequencer's playback facilities are duplicated here. It can create some great little patterns, but be careful if you activate Hold and press new notes while it's playing because the results are not always predictable. The other feature it offers is the ability to shift notes upward or downward by a semitone to create what Arturia call 'approach notes'. These can be musically useful to lead from one repetition to the next.