A multi-pattern mic that plugs straight into a computer.

One notable feature of this year's Winter NAMM show was the number of different companies introducing the world's 'first serious USB microphone'. Blue's USB offering comes in their now-familiar Ball format — blue, red and black varieties (the Ball, Kickball and 8-ball respectively) are already available — and because the newcomer is white, the name Snowball seems totally appropriate. 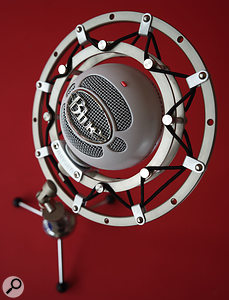 As with the other ball mics in the range, the Snowball has a resin casing with wire-mesh grilles at front and rear. A threaded stand-adaptor is set into the base and a neat table-top tripod stand comes with the microphone, along with a USB cable for connection to a computer. (The Ringer shockmount pictured here is an optional accessory.) Besides a USB port, the mic's only means of connection, there's a three-position switch at the rear which is used to switch between two cardioid-pattern modes (one with a -10dB pad and one without) and an omnidirectional mode. Overall, the frequency response extends from 40Hz to 18kHz (at -6dB, judging from the response curves given on the Blue web site), with a presence peak at 3kHz in cardioid mode and at around 10kHz in omni mode. A red light on the mic shows that it is active; all necessary power comes from the computer's USB buss.

The converters built into the microphone, which has a capacitor capsule, are fixed at 16-bit/44.1kHz and the mic can be used with computers running Windows XP or Mac OS X without the need to install additional drivers. Inside the host software, the mic shows up as two identical input sources rather than as a single mono source.

According to Blue, the Snowball makes a good general-purpose vocal or instrument mic for project studio recording, but it's also clear that they — like all the other USB mic manufacturers — have their eye on the growing Podcasting market. As all the USB mics I've seen so far have been 16-bit, I can only assume that as yet there are no suitable USB-powered chips that produce a 24-bit output. The quality that can be obtained from 16-bit is excellent, provided you can run at or near maximum level, to make use of all the available dynamic range, but where you use only a small part of that dynamic range, the resolution can suffer. When using a conventional mic preamp, you have an analogue gain control that comes prior to the converters on your audio interface or soundcard, so you can optimise your recording levels. In the case of the Snowball, you only have the choice of pad or no pad.

I set up the mic as part of an Aggregate Device under Mac OS X, so that I could use the computer's built-in audio to monitor the output. When using the Snowball to record conventional studio vocals relatively close to the microphone, the signal level produced was fine, but when it was placed in the middle of a table about 18 inches away to record plain speech (as for a Podcast, for example), the recorded level ended up at around -30dB peak. This equates to a resolution of around 11 bits, or a dynamic range in the order of 66dB. Doing the plain speech test at a distance of 18 inches produced an almost invisibly small amplitude waveform in Logic, so I normalised it to see how the sound quality would hold up. The subjective speech quality was actually very good and would be fine for most casual Podcasting or video applications, although there was a certain amount of audible background hiss, which is to be expected when working at such low levels. If you bring the mic closer, so that you get a more sensible level into the recording system, the quality improves markedly. Having a pad setting is useful when you're recording loud sources such as electric guitar amplifiers, but if the designers are serious about the Podcasting market, a +10dB boost switch would also be a good idea. 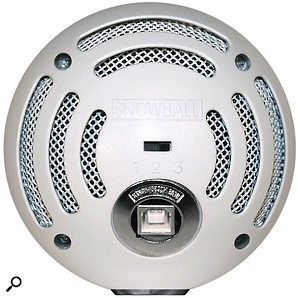 I was intrigued by the Snowball's omni mode. Typically, omnidirectional mics have an acoustically transparent mesh covering the capsule, but this mic is totally enclosed at the sides and open only at the front and rear. I felt this must compromise the omni mode's performance to some extent. When I checked the polar patterns on the Blue web site, my suspicions were confirmed — the omnidirectional pattern behaves more like a wide cardioid at most frequencies and the sound picked up at the rear is much duller than the sound picked up at the front. The different tonality of the omni mode was also to be expected, as its presence peak is much higher than that of the cardioid modes. When te mic is used on-axis, the omni setting produces a nice airy sound which makes the cardioid modes sound slightly dull by comparison — almost like listening to a typical dynamic mic next to a capacitor mic.

There's no denying that a buss-powered USB mic is a very neat solution to recording audio into a laptop or domestic computer system, and this one produces subjectively high-quality results, providing you use it close enough to the source to get a healthy recording level, by which I mean a signal peaking at -15dB or higher. In my view, the omni mode is best thought of as offering a different tonal flavour to the cardioid modes. Its pickup pattern is not truly omnidirectional and I wouldn't consider the mic to be well suited to recording round-table discussions in this mode, but used appropriately its sound quality is fine and the background noise acceptably low. If you are going to use this mic for Podcasting, it will produce the best results if you speak into it from around six inches away, and you can choose omni or cardioid mode depending on which tonality suits your voice best. For loud instruments, the pad is a sensible and welcome addition, but because there is no variable gain control you'll sometimes have to use the mic's distance from the source as a gain control instead, which may mean compromising on placement.

I'm sure that we'll see 24-bit USB mics in the future, and hopefully ones with more control over gain prior to the converters, but at the present stage of USB buss-powered technology, where the amount of current you can draw is the limiting factor, the performance of this microphone is probably nearing the limits of what is possible.

Studio-grade USB mics are available or imminent from Samson, Rode, MXL and SE Electronics. To the best of my knowledge, they are all 16-bit/44.1kHz and none offer variable gain control other than the Samson C01U, reviewed in SOS June 2006. The SE Electronics DO1 is more expensive than both the Snowball and the Samson CO1U, but it can connect via a conventional XLR cable as well as USB and features a two-way audio interface — a headphone output lets you monitor playback from the computer.

Though subject to certain technical limitations, the Snowball works well for close-up vocals or speech, while the pattern switching system gives a choice of two very usable tonalities. The inclusion of a pad switch means that it may also be used for recording louder sources, such as guitar combos or percussion.